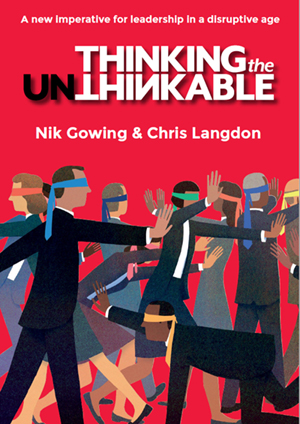 Leaders are struggling to cope with the enormous level of disruption, both in corporates and governments. How do we know? Hundreds of them have confidentially revealed their fears in a new book, Thinking the Unthinkable published by Nik Gowing and Chris Landgon.

Nik shares these insights, along with his ongoing research, with organisations through keynote and interactive workshop sessions. Equally comfortable in a board room of just a handful of C Suiters, to a stage of a 1000 or more, Nik guides the audience through the challenges they face, and most importantly the opportunities that can be harnessed.

His message is both scary and upbeat, and he believes passionately that at this time of unprecendented uncertainty, many of the answers already lie within organisations...with the younger, millennial generation, unburdened by the authodoxy and expectations of previous ones.

The book’s findings are disturbing and ominous.Thinking the Unthinkable includes latest insights from top leaders. They confirm that they are ‘scared’ and ‘overwhelmed’ by the struggle to understand then embrace the new disruptions. The book is the result of an ongoing four-year research study by Nik Gowing (former BBC and ITN international affairs presenter) and Chris Langdon (ex-MD of the Oxford Research Group).

Thinking the Unthinkable draws on hundreds of confidential high-level interviews and conversations that Nik and Chris have had with some of the most respected global leaders in business and the public sector. Those acknowledged publicly include Paul Polman (CEO, Unilever), General Sir Nick Carter (Chief of the Defence Staff from June 11), Lord Mark Price (ex-MD of Waitrose and ex-Minister for Trade and Investment), Katherine Garrett-Cox, CEO of The Gulf International Bank, the late Dame Helen Alexander, (first female CBI President), Bob Collymore (CEO of Safaricom), Dame Judith Hackitt (Chair of Independent Review following Grenfell Fire) and Sir Peter Gershon (Chairman of National Grid).

The book highlights new case studies of organisations who have successfully experimented and found new ways to embrace disruption and thrive on change.
Thinking the Unthinkable demonstrates the importance of ‘intergenerational collaboration’ so that the next generation (Next Gen) of leaders will be listened to and allowed to contribute far more actively to shaping the decisions of where they work.

The book shares unrivalled, radical and up-to-the-minute insights into the patterns and similarities of today’s leadership challenges. It reveals the enormous potential for organisations to take big risks to modify their culture, mindset and behaviour. The rewards from doing so can be immense.
Just as the world is being disrupted, the book disrupted traditional publishing models. Editing of the book by John Catt Educational Ltd was done in parallel to the manuscript being finalized. Sign off was on May 18. Within an hour printing had started. The book was published and launched within six days at Chatham House then at the Hay Literary Festival at a sold-out event.

A video with highlights of the hugely successful Hay Festival launch event is available here: http://bit.ly/2LXOSAS

The aim of Thinking the Unthinkable is to help leaders thrive from change in a period of deepening anxiety. Nik Gowing and Chris Langdon have investigated and reported ten gripping case studies from around the world. They reveal how leaders have taken on change with some success, especially after they have engaged actively with their Next Gen staff members. Addressing the frustrations and anxieties of members of the Next Gen – the leaders of the future - are central themes of this cutting-edge book.

The Thinking the Unthinkable site is up with a wealth of case studies and background info. Do visit to find out more: https://www.thinkunthink.org/

Miroslav Lajčák, President of the UN General Assembly
“This is an amazing piece of work! It deals with the little-known irony that those with the most decision-making power often feel under the most pressure to conform to the systems and norms around them… I think giving a copy of this book to every world leader would be a good place to start.”

Kristalina Georgieva, CEO of The World Bank
“I can say, very genuinely, that what you’re working on is hugely important… I was very impressed by the work Nik presented when he came to the bank.”

Lord Mark Price, Author of Fairness for All (2017), Managing Director of Waitrose (2007-2016), Minister for Trade and Investment (2016-2017)
“Fear, uncertainty and discontent is growing. Politicians and businesses are struggling for the answers. The age of the power of nation states is drawing to a close. But what will replace it? In this thoughtful book the issues are explored, and a well-reasoned case put forward to Think the Unthinkable.”

Leaders are struggling to cope with the enormous level of disruption, both in corporates and governments. How do we know? Hundreds of them have confidentially revealed their fears in a new book, Thinking the Unthinkable published on June 8 2018.