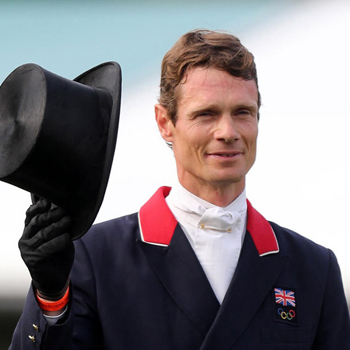 William Fox-Pitt's reputation as an all-time great was sealed when he won his 50th international three-day event, with victory at the Fidelity Blenheim Palace Horse Trials in September 2012.
He has represented Britain for the past 17 years and became the first British rider to ever reach the top of the world rankings, a feat he has manage three times during his career in 2002, 2009 and 2010. William's impressive medal collection includes Olympic team silver medals at both the 2004 Olympics in Athens and the 2012 London Olympics, and a Team Gold Medal and Individual Silver medal at the World Equestrian Games at Kentucky in 2010.
In 2011 he became the first rider to win five different 4 star events having won the Burghley Horse Trials (six times), Badminton, the Rolex Kentucky, LuhmÃ¼hlen Horse Trials and the Stars of Pau.
His choice of career was inevitable, as his mother was a member of the British three day event team and his father also completed Badminton and Burghley. He started riding at an early age and represented the Junior British team during his teens. He won two Team Gold medals at the Junior Europeans in 1988 and 1989 as well as individual Silver in 1987. By the time William had turned 20 he was competing at Badminton and in 1994 he won his maiden victory at the Burghley Horse Trials. Wins at the British Open Championships and Bramham Horse Trials in 1995 earned him his place in the 1996 Olympic team in Atlanta.
In 2005 William and his wife, Channel 4 racing presenter Alice Plunkett, opened a stables. Three of the stables horses qualified for Team GB at the 2012 Olympics. William's involvement in eventing goes far beyond riding. He is a Board Director for the Event Riders Association and is the Vice President for the Dorset County RDA. William has also written two book - 'Schooling for Success' and his autobiography 'What Will Be'.
William is a very personable, experienced and popular presenter and public speaker, who has hosted numerous corporate occasions, such as award ceremonies, gala dinners, boxes, and enjoys after dinner speaking.
Read More