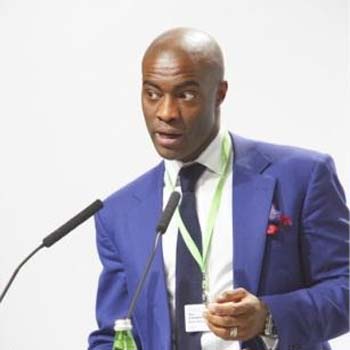 Tim Campbell has come a long way since winning The Apprentice television programme. He has become a favourite with Sir Alan Sugar the shrewd boss of Amstrad PLC who knows a winner when he sees one.

The charismatic Londoner, who was the darling of television audiences, has gone on to set up his own company and is now sharing his experiences with business audiences who want to learn the secrets of his success and discover why Sir Alan Sugar regarded him as a "great asset".

The human resource specialist wasn't a one hit wonder when the spotlight faded. After landing a one year contract with the health and beauty division of Amstrad, he remained in employment for a further year until announcing recently that he was giving up his £100,000 a year job to start a male grooming business of his own as well as The Bright Ideas Trust, a social initiative to inspire the next generation of entrepreneurs.

Tim has now taken on a new role as Head of Client Services for Emerging Talent in recruitment process outsourcing (RPO) for Alexander Mann Solutions (AMS).

His roles as London's Ambassador for Training and Enterprise (appointed by Mayor  Boris Johnson) and the UK Government Secretary of State's Enterprise Advisor (appointed by Vince Cable), in addition to his experience of working in the public and private sector, allow him to connect, inspire and motivate audiences across the country.

" I was blown away by Tim - what an inspirational speaker, I could have literally listened to him for hours. His take on business, attitudes and his background was fascinating, and his vigor and enthusiasm were the perfect pitch for a speaker in his genre."   Thames Valley University on Tim Campbell - September 2008

"¦thank you so much for your contribution last week. The feedback we have had from the event has been overwhelmingly positive...You have a great way of speaking - I don't believe there would have been a single individual in that audience who wouldn't have associated with some aspect of your speech."    Ernst & Young

"Tim held the audience spellbound with his life story so far¦.One of the delegates described him as - Fantastic - so down to earth and one of the best speakers she has heard."  Business Link Kent CIC

"Thanks for your excellent contribution to the launch of Young London Matters yesterday. Your attendance and support was greatly appreciated by all present."  Department for Children and Learners