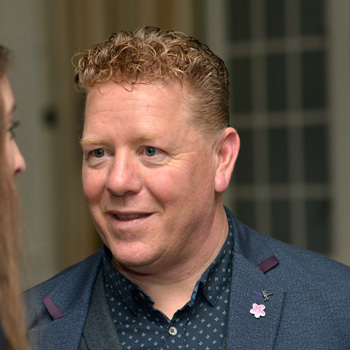 St John Greene, the author of Mum's List, grew up in the West Country where he met his teenage sweetheart, Kate. He was a qualified medic and lifeguard, known to his friends as Singe, and founded Training Saints, specialising in teaching outdoor activities and helping people gain qualifications and careers in the maritime industry.

Singe and Kate's firstborn, Reef, was diagnosed at 18 months old with a rare cancer. He was given just a six per cent chance of survival. Such was the shock that Kate, pregnant with her second child, went into labour two months early and their second son, Finn`s, life was left hanging in the balance.

Despite all the odds both boys pulled through, but it was shortly afterwards that Kate was given her own cancer diagnosis – she had triple breast cancer. Kate Greene's only concern was for her two little boys and her loving husband,. She knew she'd be leaving them very soon.

Over her last few days, Kate created Mum's List. Kate and Singe talked and cried together as she wrote her thoughts and wishes down, trying to help the man she loved create the best life for their boys after she was gone.

The list – an eclectic mix of thoughts, reminders and life lessons - included dos and don'ts and her hopes and ambitions for their sons Finn, then four, and Reef, six. Kate outlined principles she wanted to instil in the boys - including treating girlfriends with respect, and not leaving it too long to make up after a row.

Since Kate's death Singe has devoted his life to raising their two young sons. He spends all of his free time teaching them the things he loved to do with Kate: sailing, scuba diving, jet skiing and power boating near their home in Somerset.

Mum's List is St John Greene's first book and his moving story about Kate's legacy and the emotional challenges the family faced has been made into a film starring Emilia Fox and Rafe Spall.

As a motivational speaker, Singe tells his story behind the book and the journey the family went through. It's a touching and inspirational account, and Singe speaks openly about the challenges he faced bringing up two boys alone but inspired by his wife wishes, and how he wanted to give the boys the best life possible.

"In this sad, beautiful memoir, [St John] tells his heartbreaking but inspirational story - one that will make you appreciate love and life and stay with you long after you've read the last page"  Closer, 'Hot Picks'

"It's one of the most moving stories you'll read"  Daily Express

"An inspiring and moving account of the couple's relationship. It is also testament to her deep love for the young sons she realised she would never see grow up"  The Sun