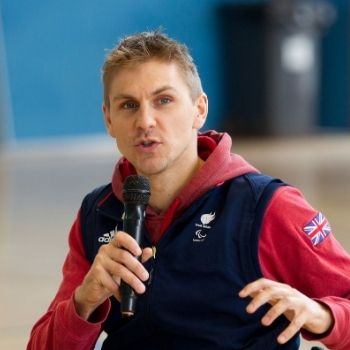 Steve Brown is an award-winning TV presenter, public speaker and a mentor to many. He is also a wheelchair rugby player and coach who captained Great Britain at the London 2012 Paralympics.

As a wheelchair rugby player Steve became a European Championship gold-medal winner and in 2015 was recognised in the Shaw Trust Power 100. In 2018 Steve received the New On-Screen Talent award at the Royal Television Society West of England Awards.

Steve is also a Freeman of the Borough of Swale. In the old days this would have exempted him from tolls and allowed him to graze his livestock wherever he wished. Nowadays, to his immense disappointment, it no longer does.

Steve, thanks so much for such an inspiring talk with the Adyen team earlier, they all loved it. What a fantastic speaker you are.

Thank you very much for hosting and speaking at our conference. Your talk was extremely well received by all delegates and we are very grateful for your time in preparing, speaking and attending the conference.

I would like to personally thank Steve for his inspiring and insightful speech at our Global HR Summit last week in Munich. I am extremely grateful for the time and effort he took to share his experiences with our HR Community. His insights were highly valued, and we received nothing but hugely positive feedback on Steve’s presentation.

Thank you for delivering an awesome Key Note speech for the Coloplast UK & Ireland teams. As you will have seen by now on LinkedIn, we were inspired, motivated and touched by your speech. Personally, I was in awe of how you were able to connect to the room and make it personal for each and everyone in the audience. So a massive thank you from the whole organization!