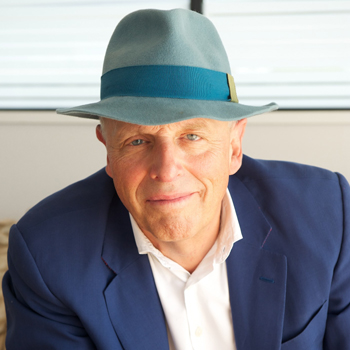 Simon left school at the age of 16 with 4 'O' levels in the days when they used to do peace signs and mean them. He went on the road with the likes of Rod Stewart and The Moody Blues before becoming a stage designer for many of the concerts of the 70's and 80's.

After a spell in television and frustrated in his early 40s he conceived and launched YO! Sushi to critical and commercial success. It has been said that to be a great Blues singer you have to have suffered the Blues and Simon was close to the edge many times in his various businesses learning all the time and honing his creative and business instinctive acumen.

An inspiring yet down to earth and common sense speaker Simon speaks from the heart from someone who has been there done it, failed and ultimately succeeded in building a brand which has now been expaneded to incorporate hotels (Yotels) and Spas (Yozones).

Simon speaks around the world at corporate and promotional events and has become an in demand item on the speaking circuit at conferences, dinners and awards.

"Thank you so much for your support and contribution to our leadership conference last week. Your presentation...was truly memorable. I particularly appreciated the way you were able to convey your simple but very powerful insights as you recounted the story of your own success. A great number of these...resonated for Unum's leadership group."  Simon spoke at the UNUM Leadership Conference in November 2007

'Simon was unquestionably the right solution to the closing session of this year's event. They adored him - not just because he's a great speaker, but because he is their sort of person, so they could relate to him better than most guest speakers.'  Elaine Dellar of CO Plus who organise the OTE Forum .  Simon spoke at the OTE Forum in Athens - October 2004

"His inspired, passionate speech literally gave me chills down my back." - Branding America

"You have inspired a lot of people to have the courage to think outside the box." - Glaxo Wellcome