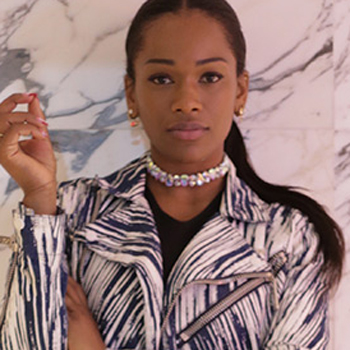 Whilst studying at Central St Martins, Sharmadean started a hip-hop fanzine called WAH in 2006, as a person enthusiastic about millennial girl culture, she swiftly gained a international following by as a blog pioneer and empowering and gathering likeminded women in panel events as early as 2008.

Her mission is to use technology to economically empower women, after graduating, she then founded WAH Nails as a side project in 2009. A salon and creative space in Dalston, recognised as changing the face of nail culture by offering a different community and millennial owned experience to the customer.

Sharmadean was named as one of the “15 people who will define the future of arts in Britain” , which is not surprising as WAH Nails expanding into doing the shows, parties and events at London Fashion Week for brands such as Diesel, Nike and Marc Jacobs. WAH has also held a thriving salon in Topshop Oxford Circus for 4 years.

With the success of WAH still rapidly growing, Sharmadean launched a product line in Boots UK and accumulated £1.2million worth of nail products in in inaugural year.

Sharmadean has been awarded an MBE for her services to the Beauty industry, as well as having written two books, one being the bestselling WAH Book of Nail Art in 2013.

Launching in 2019, her angel investor- funded platform, Beautystack is a invitation-only hub for beauty professionals connecting customer and beautician, allowing the customer to directly book appointments with this new wave of next gen beauticians.

Sharmadean is a popular entrepreneurial speaker and is available for corporate engagements.