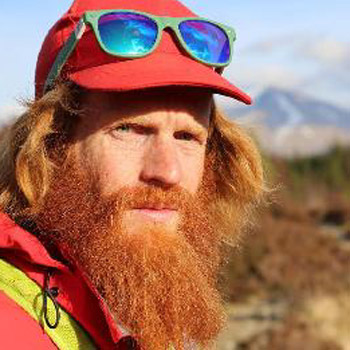 Popular motivational speaker, named 'Adventurer of the Year' at the Scottish Adventure Awards, Sean's talks focus on his journey from working as a corporate photographer to realising his ambitions and potential by challenging himself in some of the toughest ways imaginable.
Extreme endurance adventurer Sean Conway is the first and only man in history to swim the length of Britain from Land's End to John O'Groats across 900 miles. He has cycled the length of Britain (1300 miles) and in 2015 completed his Great British Triathlon by running the length of Britain.
In 2016, Sean took on an even bigger challenge: a self-supported continuous Ultra Triathlon around the coast of Britain.  A programme about his exploits will be broadcast on Discovery Channel in autumn 2016.
Born in Zimbabwe, Sean had an adventurous upbringing with his conservationist game ranger father, Tony, who has been at the forefront of the fight to save the rhino for 35 years, something which Sean passionately supports.
Sean spent his early years climbing trees and chasing elephants out of his garden. This unique childhood has been the fuel for his adventurous ambition and throughout his teens he competed in several river marathons including The Duzi Canoe Marathon, arguably the world's most prestigious canoe race in South Africa from Pietermaritzburg to Durban. At 15 years old he completed the Midmar Mile (the world's biggest open water swimming event) in 35 minutes and plans to compete again in 2014.
Well-known for his quirky take on endurance sports and adventures, Sean came to the UK in 2002 with just £100 in his wallet and started working in Cambridge cutting 12,000 cabbages a day and then as a freelance photographer in London, whilst living in a tiny room in London with 7 other people, spending any cash he earned on various travels and bonkers adventures.
Giving up a career in photography to pursue a dream of breaking the world record for cycling around the world, Sean gained sponsorship from USwitch.com and set out on this epic adventure on 18th February 2012. After three weeks he was ahead of schedule averaging nearly 180 miles a day. His dreams were shattered in America when a driver hit him causing severe whip lash, concussion, torn ligaments and a compression fracture to the spine. Despite this, Sean continued on dropping to 140 miles per day, changing his goal to get back to London in time for the Olympics and raise money for charity. He made it back with a week to spare, having covered 16,000 miles - 12,000 of them with a fractured spine.
Looking for his next hardcore adventure, Sean wanted to prove that he could break a world record and decided to attempt to become the first person in history to swim the length of Great Britain. He cycled from Land's End to John O'Groats in 2008,  then tackled the second leg of his GB Triathlon in 2013 battling the weather, currents and a remarkably large amount of jellyfish. Sean and his legendary beard made history on November 11th 2013 after 135 days at sea.
Sean is passionate about encouraging others to take on a challenge and live life more adventurously.  He tailors each talk and his messages are built around his own unique perspective on courage, resilience, challenge and a call to action to 'Find Your Beard'. (Beard is an archaic verb meaning to boldly confront or challenge). Sean knows what it takes to tackle seemingly impossible goals, develop resilience when it gets tough, and stay motivated for the long haul despite disappointment, injury and set-backs.  Sean‘s own story of how he ˜found his beard‘ is entertaining, life affirming and inspirational.
Read More