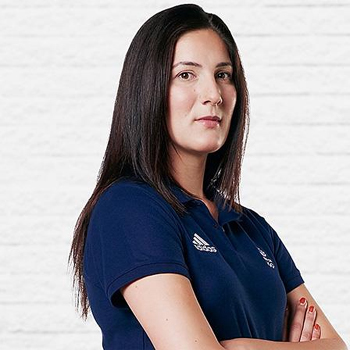 Born in Doncaster in 1983, Sarah started her training at the Doncaster All Stars Taekwondo team. Sarah started to make a name for herself in 1998, by becoming Junior World Champion at the tender age of 15, followed by Junior European Champion in 1999.
Sarah then qualified for the 2000 Olympics in Sydney, drawing the attention of legendary Hong Kong martial arts star and Hollywood film star Jackie Chan who sponsored her. As a teen she nearly took an Olympic medal in 2000,  finishing 4th.  Sarah became World Champion in 2001, the first British World Champion ever.
Sarah has been four times European Champion and World silver medallist in 2005. In 2004 she competed at the Athens Olympics once again performing well.  In 2008 she competed in the Beijing Olympics but was controversially eliminated in the quarter finals after the referee failed to recognise clear points scored. The decision was later overturned but with 10 minutes to prepare, Sarah was always up against it. Even after losing this match and injuring her ankle in the process, Sarah won the bronze medal - the first ever medal for GB Taekwondo - and become one of the most memorable athletes from Beijing.
Not only has Sarah shown a consistent ability to compete but has inspired many on and off the mat. She set up her own academy aiming to educate and train young, aspiring athletes across a range of sports. Just a further example of why Sarah is a true ambassador for British sport.
Sadly in 2011 she lost her mum and dad to cancer.
Off the mat, Sarah was awarded an MBE in 2012 for services to taekwondo and was selected by her fellow athletes to read the Athlete oath at the opening ceremony of the 2012 London Olympics. She retired from competition in 2013 to become Team GB's taekwondo coach.
Read More