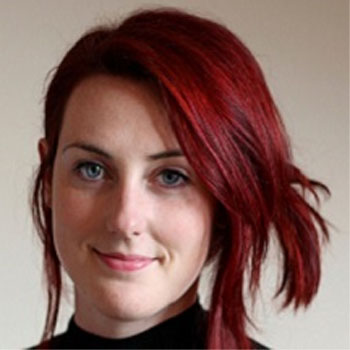 Samantha Payne is Co-Founder of Open Bionics; an award-winning startup developing low-cost bionic hands that look and feel good, for amputees or those born without a hand. Open Bionics turns children with limb differences into bionic superheroes by working with companies like Marvel, Lucasfilm, and Walt Disney Animation.

The company has won multiple awards for engineering and innovation including the James Dyson Award, two British Engineering Excellence awards, and Fast Company's Innovation award.
Samantha was recently named as “one of the top 25 women in robotics you need to know “about by Robohub and Marie Claire's “Top Women In Tech”.

She co-founded Open Bionics with Joel Gibbard in 2014, and focuses on building Open Bionics’​ profile, business model, network, and raising rounds. Samantha and Joel pitched the company at the Finals of Intel's Global 'Make It Wearable’​ Challenge in 2014 and took home the $250,000 cash prize for 2nd Place from among over 400 entrants in the Challenge. The startup has also won multiple other awards for innovation, including being named one of the top 50 robotics businesses in the world alongside Google and Amazon.

Samantha has a background in journalism and digital marketing, and was shortlisted for the 'Entrepreneur of the Year'. When not working with amputees and building a business, Samantha freelances as a journalist with an interest in technology and startups.

Samantha was recently named as “one of the top 25 women in robotics you need to know “about by Robohub and Marie Claire's “Top Women In Tech”.