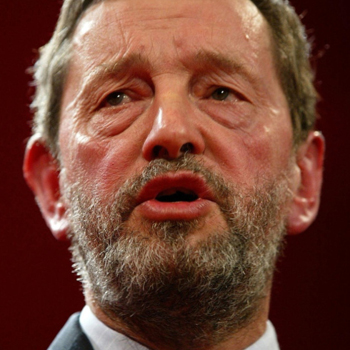 David Blunkett - now Rt Hon Lord Blunkett of Brightside -  served as home secretary (2001–04) and secretary of work and pensions (2005) in the Labour government of Tony Blair.

Blunkett, who was blind from birth, was brought up in poverty after his father died in an industrial accident at work. He was educated at schools for the blind, but he turned down a course in training to be a piano tuner and insisted on a wider education. He studied part-time at a technical college and did well enough on his exams to win a place at the University of Sheffield, where he studied politics. In 1970 Blunkett’s passion for politics led him to contest and win a seat on Sheffield’s city council, making him the youngest ever city councillor in Sheffield. He rose to become the council’s leader in 1980. Blunkett belonged to Labour’s left wing, an affiliation that helped in his election to the party’s national executive in 1982.

At that time Labour, having lost power nationally in 1979, was badly divided (in 1981 a moderate faction broke away to form the Social Democratic Party). In the 1980s these divisions came to a head when party leader Neil Kinnock sought to expel a group of hard-line left-wingers. Blunkett sided with Kinnock on this and on a wider strategy for modernizing the party. In 1987 Blunkett was elected a member of Parliament for the safe Labour constituency of Sheffield Brightside. In 1994 Labour’s new leader, Tony Blair, appointed him the party’s shadow minister, or spokesman, on education. It was a key appointment, as Blair announced that on becoming prime minister he would make his three top priorities education, education, education.”

When Labour won the 1997 general election, Blunkett became education secretary and was tasked with raising school standards to match those of other prosperous countries. Blunkett introduced a number of reforms, including requiring schools to provide children up to age 11 with a daily literacy hour” and a numeracy hour” in order to improve basic skills. Blunkett frequently cited his own disability and impoverished background to argue that all children had the potential to succeed and that no school should be allowed to use the fact that its children came from deprived or broken families as an excuse for bad results. Blunkett’s tough strategy was widely praised, although he was not always popular with teachers’ unions. Following Britain’s 2001 general election, Blair appointed Blunkett to be home secretary, with a brief to be equally tough in tackling crime, disorder, and threats to internal security. It was Blunkett’s reward for having been one of the most successful cabinet ministers during Blair’s first term in office.

After the terrorist attacks in the United States on September 11, 2001, Blunkett’s job looked to be an even bigger challenge than anticipated. His response to the attacks included a tightening of immigration law and a proposal that all British citizens be required to carry state identification cards. He also worked aggressively toward prison reform and the strengthening of antiterrorism legislation.

In 2015 he stepped down from Parliament. Shortly thereafter, he became chair of the University of Sheffield’s law school. An inspiring speaker.