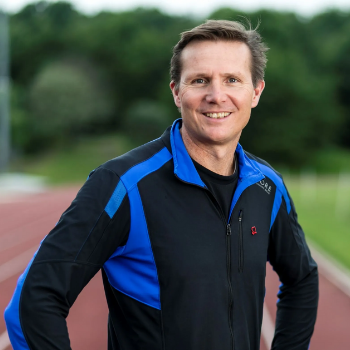 Roger Black is one of the country's most successful sportsmen having represented Great Britain for fourteen years at the highest level in the world of athletics. Born in Portsmouth in 1966, Roger was educated at Portsmouth Grammar School and subsequently went on to read medicine at Southampton University. He is particularly admired for his triumphs over adversity, overcoming serious injuries and a rare heart valve condition to go on to become a world champion.

In addition, Roger has appeared regularly on numerous prime-time TV programmes, including A Question of Sport, They Think It's All Over, Strictly Come Dancing, Celebrity Master Chef and GMTV. He co-presented the last series of Tomorrow's World and co-presented 4 series of the BBC's award winning City Hospital and appeared in the Superstars series.
Roger continues his career as a television presenter, motivational speaker and conference host.
"We have quarterly events and the majority of the feedback has been that Roger is the best speaker we have had!"   Accenture

"Roger was an excellent guest speaker and leads the way in style and content. He held the audience's complete attention with inspirational messages on achieving potential on both a business and personal level. There was something for everyone and his interaction with delegates was much appreciated."
Electrical Contractors Association

"We had really great feedback on your session and you tailored it really well for the audience, so our Dutch and Nordic colleagues were very positive too."   Specsavers

"Thank you for attending our workshop and providing us with a really valuable insight into what it takes to succeed. Your presence and the content of your session set the rest of the event up perfectly."   Southern Water

Roger joined us alongside his business partner and fellow athlete Steve Backley on June 11th 2020 where they discussed their brand spanking new BackleyBlack- Mind Setting programme which draws from their own mental mindset that gained them all those Olympic medals! Comprised of bitesized online segments, alongside live sessions from the pair.

Click here to find out more information on the session: