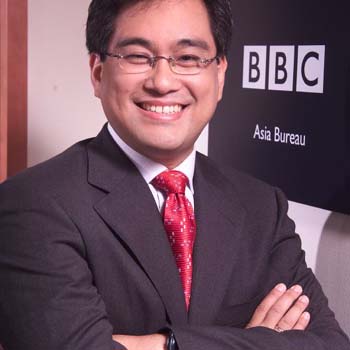 Rico Hizon is a Filipino broadcast journalist with BBC World News. He anchors Newsday and Asia Business Report, which is broadcast to more than 300 million households worldwide. He is the first-ever Filipino news anchor to work for two of the world's most prestigious television news networks - CNBC Asia and BBC World News
Hizon started his broadcast career at Manila-based GMA Network, from 1988 to 1995, where he was responsible for covering capital markets, banking and finance, real estate, investment and corporate developments. He anchored the daily business program, Business Today, GMA News Live and Stock Market Live from the trading floor of the Philippine Stock Exchange. During his tenure, Hizon won the "The Outstanding Young Men (TOYM) for Broadcast Journalism" award.
Hizon then joined CNBC Asia in April 1995, based in Hong Kong and later in Singapore, where he was the main anchor of the morning edition of CNBC Today, Squawk Box, Market Watch and Power Lunch.
Hizon joined BBC World News in 2002, and anchored the daily business and finance programme Asia Business Report and Asia Today live from Singapore Monday to Friday. Since June 2011 Hizon has co-presented the new BBC Newsday programme from Singapore, with Babita Sharma in London. He is also a regular on BBC World Business Report as an Asian business correspondent
Read More