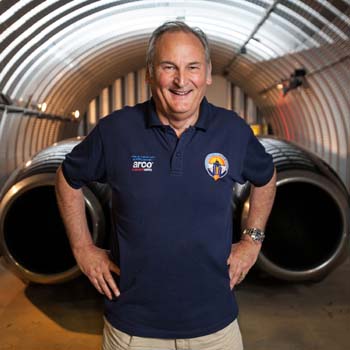 6Richards life story is a gripping roller coaster of the unexpected and the unbelievable; a tale of great struggles and success, as well as disappointment and failure. His daring life has been spent taking risks, living on a precarious edge, submerged in debts and battling to make ends meet. But his incredible gung-ho enthusiasm, determination and ingenuity have encouraged others to work with him and achieve world records that nobody ever thought possible.

Born in 1946 in Edinburgh, Richard Noble`s obsession with speed began at the age of 6 when his father took him to see John Cobb`s 200 mph jet boat, Crusader. He never forgot the intense thrill he felt that day and a seed was sown that would change the course of his life.

After schooling at Winchester, his father had great plans for Richard`s career in the army but Richard deliberately failed the entrance so he could go his own way - a huge embarrassment to his father who was in charge of university recruitment at the time. Richard has tried to be a novelist and sell concrete floors. He applied to join the SAS and learnt and taught management with the American Management Association, skills later put to good use for ThrustSSC, but felt there was more to life than working in a big multi-national.

Eventually, Richard put his conviction to the test and sold his TR6 car for cash to fund his self built, crude THRUST1 jet car- the first pure jet car designed and built in England. Thrust1`s first test run nearly killed him when the car rolled. His wife, Sally, thought she had lost him forever. But Richard was surprised that he did not panic and was determined to get on and build Thrust2 as soon as possible. He then decided to place an advert: "Wanted 650 mph car designer". This advert found John Ackroyd and by 1978 they started building the car. In 1980 Thrust2 created 6 new British records including the Flying Mile of 248.87 mph. Overcoming various design, sponsor and location problems, Thrust2 eventually took the world record averaging 633.468mph, with a peak speed of 650.88mph. This record was held for 14 years, the second longest, for a land speed record, of all time.

Following his great success with Thrust2 Richard Noble moved towards the ultimate land speed record - The Supersonic Dream. The late 1990s saw the beginning of Anglo-American race to create the world's first supersonic car. Building the car took 100,000 man hours and required a 231 company supply chain but finding the right driver was the next problem. A six month competitive driver research programme was set up at Farnborough to evaluate the 32 candidates. This was won by the ice-cool RAF Squadron leader Andy Green.

There was also the constant battle to secure financial support and sponsorship. Money was always a problem. Richard went public and set up the Mach One Club to give supporters information, sell fuel vouchers and merchandise - even redundant parts! The Club ended up contributing 20% of the £2.8m  costs to the project. Most people believe that the project would have cost £30-£40m if it had been carried out by British Industry. As the car and the project developed corporate sponsorship dropped off but Richard used the internet had to help fund 250,000 gallons of fuel. Thousands of people bought fuel certificates at a rate of 30,000 gallons a day.

Despite all these setbacks, Richard`s ultimate dream was realised in all its glory although at the end both the car and the team were "knackered".

Richard speaks at corporate events around the world. Drawing on his long and varied career he can talk about innovation, team work and overcoming adversity.
In 2008 he announced the Bloodhound project - to build a 1000mph car.

"...What a gripping presentation, which demonstrated your complete passion, drive and adrenaline for "speed." You were exceptionally popular and we've only received positive feedback from your appearance..."  COLT Telecommunications on Richard Noble