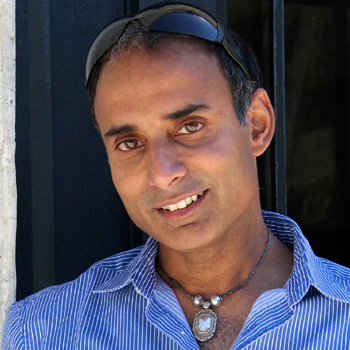 Reza was born in England to Indian parents and sent off to India to be educated as his parents wanted him to stay in touch with their roots. This provided a good British education, which left him speaking English with a public school accent and Hindi with an English accent. A hybrid torn between two worlds.

His father passed away when he was just 16 and he took over the running of the family business, The Star of India Restaurant in London. He inherited a piece of 1950's London, flock wallpaper and all, and set about inflicting his own brand of artistic flourish. Voila; from flock to Baroque!

But with his inimitable concentration span of approximately five minutes, another revamp promptly followed. This time a cross between a Zeffirelli production and the Sistine Chapel.

Of course he has always been in involved in Indian cooking and yet he loves to experiment with foods from all around the world, adding elements and ingredients that bring a new dimension to a traditional dish. He is a firm believer in bringing a personal touch to cooking.

Managing a restaurant does have some perks. A regular customer at The Star happened to be a television director. They got talking and he came up with the idea of doing a cookery programme with Reza and the then Goddess of Indian cookery; Madhur Jaffrey.

He first came to the public's attention on UKTV Food Channel's Delhi Belly with Sanjeev Bhaskar, the star of Goodness Gracious Me/The Kumars. This then lead on to Coconut Coast, United States of Reza and A Place in France, one of the more bizarre ideas for a TV show, where Nigel Farrell set up an Indian restaurant in the south of France.  Reza was also resident chef on ITV's This Morning.
His latest series 'Reza, Spice Prince of India' for the Food Network follows Reza on his travels to India where he unveils Rajasthan foods and royal feasting traditions and demonstrates his contemporary spin on traditional Indian dishes.

Aside from cooking, Reza leans towards the arts and has a passion for music, having come to realise that food and music are linked. "A symphony of taste which feeds the senses is like beautiful music which nourishes the soul."