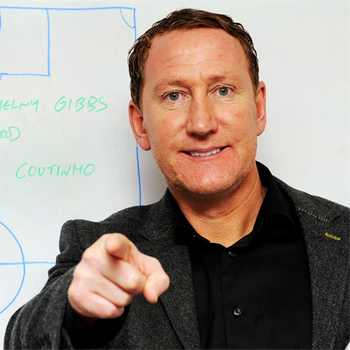 Ray Parlour spent 14 years with Arsenal at Highbury. He made 468 appearances in all, winning two FA Cups, the League Cup, three league titles and two FA Cups (scoring against Chelsea in 2002). He also played in the Champions League and earned 10 caps for England.
Dubbed the 'Romford Pele,' Ray broke into George Graham's Arsenal side and quickly built a reputation as an industrious player, improving match by match. When Arsene Wenger arrived he flourished. With his footballing brain, skill and tackling ability he gave the midfield a quality balance - playing alongside the likes of Patrick Vieira and Dennis Bergkamp.
Ray left on a high note shortly after Wenger's 'Invincibles' had completed an unbeaten title campaign. He signed for Middlesbrough, then Hull City, before moving swiftly into the media. A natural communicator and storyteller, he hosts a show on talkSPORT as well as contributing to other outlets both at home and abroad.
Ray is a genuine and immensely likeable man, with a treasure chest of tales to share. He's also an adept motivator, especially on the subject of high performance teams.
Read More