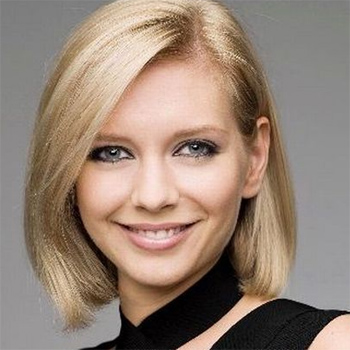 Rachel Riley replaced Carol Vorderman as the numbers expert on Channel 4's long-running quiz show 'Countdown'.  A regular guest on the hit comedy panel show '8 Out of 10 Cats' on Channel 4, Rachel has also competed in the C4 specials '8 Out of 10 Cats Does Countdown' and '8 Out of 10 Cats Does Deal or No Deal'. She has also appeared on BBC1's 'I Love My Country' and 'Britain's Brightest' and she co-presented 'The Gadget Show' on Channel 5..
Rachel is an avid Manchester United fan and has presented a special show for MUTV alongside Ryan Giggs and Rio Ferdinand, as well as an exclusive live studio interview with Andy Cole.
She has taken on the challenge of BBC1's Celebrity Mastermind and has also raised substantial funds for her favourite charities by competing successfully in various celebrity editions of quiz shows including 5 Minutes to a Fortune (C4), Pointless Celebrities (BBC1), The Bank Job (C4), Million Pound Drop (C4) and The Chase (ITV).
Rachel appeared in the Channel 4 Dispatches documentary 'Kids Don't Count' which asked how and why we are failing Britain's children when it comes to maths, visiting a primary school in Bristol to help encourage the children to tackle their maths demons.
Rachel has a keen interest in promoting maths and science to young people. She makes frequent school visits and has been involved in a number of numeracy initiatives.
Brought up in Thorpe Bay, Essex, Rachel graduated from Oriel College Oxford with a degree in Mathematics, covering Quantum Theory, Fluid Mechanics and Applied Maths and was made a scholar in 2006.
Read More