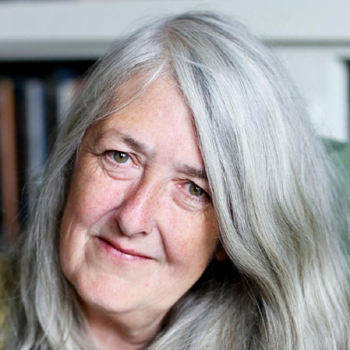 Professor Mary Beard, OBE, FBA, FSA, is a professor of classics at the University of Cambridge and professor of ancient literature at the Royal Academy of Arts. She is the classics editor of the Times Literary Supplement, and author of the blog which appears in The Times as a regular column, "A Don's Life". Her frequent media appearances, TV presenting and sometimes-controversial public statements mean she is regularly described as "Britain's best-known classicist".
Opposed to the elite image of her subject, her crusading attitude saw her teaching in Jamie Oliver's Dream School on television in 2011. The only child of a father who was an "old-fashioned liberal architect" and a headmistress mother who was an enthusiastic reader, she attended a private girls' school and was inspired by trips to the British Museum. As a student she remained at Cambridge for her Ph.D. thesis entitled "The state religion in the late Roman Republic"
And returned as a Fellow of Newnham College becoming the only woman lecturer in the Classics faculty. It was during that same year that the book she co-wrote 'Rome in the Late Republic', with Michael Crawford, was published. In 2004  Mary Beard was elected Visiting Sather Professor of Classical Literature for 20082009 at the University of California, Berkeley, where she has delivered a series of lectures on "Roman Laughter".
In 2010  on BBC Two, she presented the graphic historical documentary,
Pompeii: Life and Death in a Roman Town, She then wrote and presented the three part television series, Meet the Romans with Mary Beard for BBC Two in 2012 and is a  regular contributor to the BBC Radio 4 series "A Point of View", delivering essays on a broad range of topics.
2013, saw Mary Beard named Royal Academy of Arts professor of ancient literature.
Publications include:-
Rome in the Late Republic (with Michael Crawford, 1985, revised 1999)
The Good Working Mother's Guide (1989)
Pagan Priests: Religion and Power in the Ancient World (as editor with John North, 1990)
Classics: A Very Short Introduction (with John Henderson, 1995)
Religions of Rome (with John North and Simon Price, 1998)(vol. 1) & (vol. 2)
The Invention of Jane Harrison (Harvard University Press, 2000)
Classical Art from Greece to Rome (with John Henderson, 2001)
The Parthenon (Harvard University Press, 2002)
The Colosseum (with Keith Hopkins, Harvard University Press, 2005)
The Roman Triumph (Harvard University Press, 2007)
Pompeii: The Life of a Roman Town (2008) (US title: The Fires of Vesuvius: Pompeii Lost and Found; Harvard University Press)
Confronting the Classics: Traditions, Adventures and Innovations (Profile Books, 2013)
Laughter in Ancient Rome: On Joking, Tickling, and Cracking Up (University of California Press, 2014)
Read More