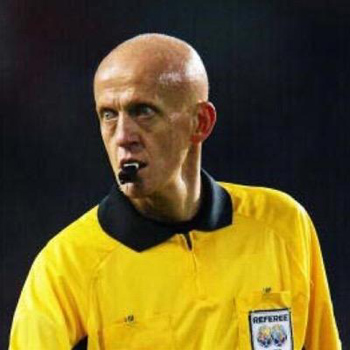 Pierluigi Collina is a financial advisor, and widely regarded as one of the world's best football referees before his retirement in 2005

He attended the University of Bologna, graduating with a degree in Economics in 1984. During his teenage years he played as a central defender for a local team, but was persuaded in 1977 to take a referee's course where it was discovered that he had a particular aptitude for the job. Within three years he was officiating at the highest level of regional matches, while also completing his compulsory military service. In 1988 he progressed, more rapidly than normal, to the national third division, Serie C1 and Serie C2. After three seasons he was promoted to officiating Serie B and Serie A matches.

About this time he contracted a severe form of alopecia, resulting in the permanent loss of all his facial hair, giving him his distinctive bald appearance and earning the nickname Kojak. In 1995, after he had officiated at 43 Serie A matches, he was placed on FIFA's Referees List. He refereed five matches at the 1996 Olympic Games, including the final between Nigeria and Argentina; and the 1999 UEFA Champions League final between Bayern Munich and Manchester United. In 2002, he reached the pinnacle of his career when he was chosen as the referee for the World Cup final. He was also the referee for the 2004 UEFA Cup final between Valencia and Olympique Marseille.

Euro 2004 was Collina's last major international tournament as a referee, as he reached the mandatory retirement age of 45 for international referees early in 2005 and retired from the Italian leagues in August 2005.

Recently, the FA Premier League publicly discussed having foreign referees officiate selected high-profile matches, and has had talks with Collina about his possible availability to fill such a role. (In England, the mandatory retirement age for referees is 48.)

Although Collina is closely identified with football, his favourite sports club plays basketball. He is a lifelong supporter of Fortitudo Bologna, one of Europe's leading basketball clubs.