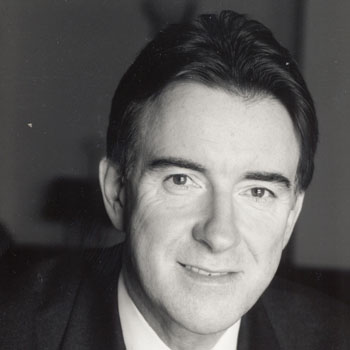 Lord Peter Mandelson Former Labour Party's Director of Campaigns & Communications. He was one of a group of people behind the rebranding of the Labour Party as "New Labour" and its subsequent landslide victory in the 1997 election. He served in a number of Cabinet positions under Tony Blair, playing a leading role in his leadership campaign and was the UK's Deputy Prime Minister under Gordon Brown.

First elected to the House of Commons at the 1992 general election he became a Member of Parliament for the constituency of Hartlepool and remained MP for Hartlepool until his appointment to the European Commission in 2004.
Appointed to the UK Government as Secretary of State for Trade and Industry in 1998, he was responsible for the introduction of the National Minimum Wage and overseeing new measures to strengthen regional development through the creation of Regional Development Agencies. In that same year he was appointed a privy councillor.
In 1999, he was appointed Secretary of State for Northern Ireland, during which he oversaw the creation of the devolved legislative assembly and power-sharing executive, and reform of the police service.
He resigned twice from the Cabinet before leaving Parliament to take up an appointment as a European Commissioner from 2004 to 2008 and the following year was appointed UK Secretary of State for Business, Enterprise & Regulatory Reform, following the creation of the new Department, Business, Innovation and Skills (BIS). He later rejoined the Cabinet for a third time, being made a life peer in the House of Lords.
Mandelson's memoirs, The Third Man: Life at the Heart of New Labour, were published in July 2010 and in the same year Lord Mandelson became chairman of the consultancy firm, Global Counsel LLP. Today he is the President of Policy Network, an international policy think tank, and has also been the High Steward of Hull since 2013
Read More