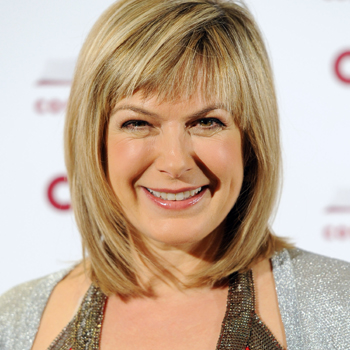 Penny Smith co-presents The Breakfast Show with Penny Smith and Paul Ross for BBC London 94.9. Penny's career as a reporter begun at the Peterborough Evening Telegraph, after four years she left to backpack through Central and South America and South East Asia where she reported and presented on a current affairs programme for Radio Television Hong Kong.
In 1984 she joined Radio Trent as a reporter/presenter and then worked for Central Television as press officer for documentaries and drama. She co-presented the local evening news for Border Television and after a year she co-presented Thames News with Andrew Gardner. Penny then moved to Sky News before becoming a presenter on GMTV in 1993.
Penny has also presented Crime Net, Crime File and Crime Fighters for Carlton, Crime Monthly and Most Wanted for LWT, Going For A Song for the BBC and 'Celebrity' for ITV. She also co-presented the 1995 series of The Krypton Factor alongside Gordon Burns. In 2006 she starred in the BBC 2 show Just the Two of Us, appeared on Never Mind the Buzzcocks and several episodes of Have I Got News For You and has been a panellist on the daytime programme Loose Women.
Penny left GMTV in 2010,  since then she has reviewed the newspapers on ITV's This Morning and was a regular contributor on The Alan Titchmarsh Show. She has also presented Market Kitchen: Big Adventure alongside Matt Tebbutt on the Good Food channel. Smith has written for a number of national newspapers and magazines, including a beauty column for Femail in the Daily Mail and articles in 'Essentials' magazine, Good Housekeeping and Woman and Home.
Among her many interests she lists yoga, opera and hiking and has produced three yoga videos: "Penny Smith's Power Yoga", "Penny Smith's Essential Guide to Yoga" and "Penny Smith's Yoga Masterclass".