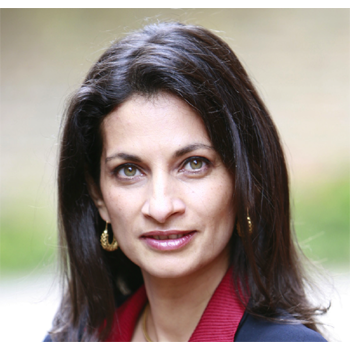 Nisha Pillai is an accomplished former news presenter with BBC World News who now specialises in moderating Panel Discussions and High Level Dialogues. She has worked closely with several UN agencies, with scientific institutes such as CERN, and with industry events and conferences in the Finance, IT and Energy sectors.
Nisha‘s 25 year career at the BBC culminated as one of the main news anchors at BBC World News, where she reported extensively during the 9/11 attacks and the Iraq war. She was also one of the first regular interviewers on Hard Talk. As an award-winning investigative journalist at Panorama, the BBC‘s flagship current affairs programme, Nisha had notable investigations to her name. She was awarded the Royal Television Society‘s Award for her investigation into the late Robert Maxwell, which was broadcast a month before his death. Nisha cut her teeth as a financial journalist at the Investors Chronicle and on the BBC‘s Money Programme. She read economics at the London School of Economics and was a graduate trainee at Schroders.
"A number of people spoke to me about your high standard of professionalism as the meeting's moderator...It was a great Thematic Segment, and we are pleased and happy about it.  We very much appreciate how easy and pleasant it was to work with you to prepare the session and during it, and with your professional commitment throughout to do a really good job."  Chief, Human Rights and Law Division,  UNAIDS Secretariat, Geneva - December 2012
"We received extremely positive feedback on both sessions moderated by you. In fact, some delegates indicated in the evaluation form that we should have allocated more time to the interactive session with the panellists. We are all very happy with the outcome of the meeting so thank you once again for your contribution and excellent performance!"   Nisha moderated for the UN in Bangkok - February 2012
"It was our pleasure to see you last week in Mumbai. Thank you very much for taking part in the India Shipping Summit 2011, which has been a great success, your time and effort is much appreciated. We have received a lot of positive feedback from the participants, the piracy debate was the a major highlight of the conference."  Nisha hosted and facilitated for Seatrade - October 2011
"I would like to thank you very much for moderating the panel session..... It was a very interesting panel and that the audience enjoyed it. Both the panellists and you did a great job, so thanks again for your time spent on preparing it and for moderating it onsite."  EWEA - European Wind Energy Association  conference in Brussels - March 2011
"Nisha was great and we would love to work with her in the future again."  UNDP on Nisha Pillai - October 2008

"All went well and we were happy to have Nisha moderating two important feedback sessions. She did a great job." Nisha chaired the Global Humanitarian Forum in Switzerland - June 2008