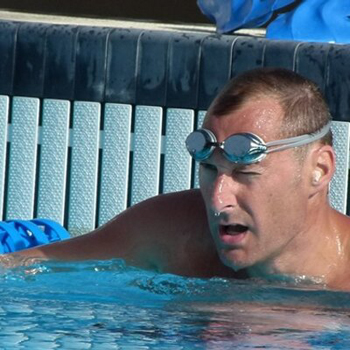 For 13 years he represented GB, holding the National Record for 24 years. He is one of the most consistent championship performers British swimming has ever produced.

Along with three consecutive European Titles, Commonwealth and World Gold medals combined with World Records, he won Olympic Silver and Bronze medals in an amazing seven year run from 1988 to 1994. He is also a World Masters Champion and record holder.

Nick received his MBE from The Queen in 1993.  He has also been awarded an Honorary Fellowship Degree from the University of Sunderland for his contribution to sport and the position of University Chancellor at Walsall Children's University evaluated by the University of Cambridge.

After retiring from elite sport in 1996, Nick established a sports communications business focusing on sport development, marketing and events. Integrated into the business is his National Governing Body approved swim academy, an integral part of his sports consultancy, Sports Communication Group Ltd.

Nick is the creator and publisher of the successful swimZone„¢ programme, a swimming fitness programme available to the public and was the innovator in taking the 'gym culture' into the swimming pool environment across leisure facilities throughout the United Kingdom. Over the years Nick has undertaken extensive mentoring work in education as well as the community for the Youth Sport Trust, Creating Excellence, DKHLT and Jaguar Academy of Sport. He has worked as the Senior Competition Manager for Tyne & Wear developing inter-school competition across 10 School Sport Partnerships.

A popular sports broadcaster, Nick was at the London 2012 Olympics, commentating on the swimming heats and finals and well as presenting live from the closing ceremony.