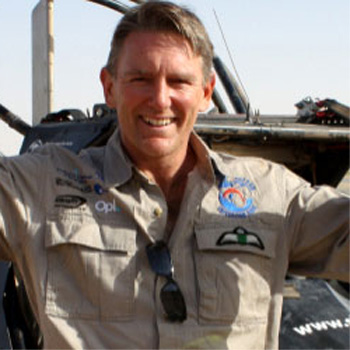 Neil Laughton is the founder of Laughton & Co., an organisation dedicated to developing leadership talent, communication skills and team working abilities in the corporate sector.  He is a former Royal Marine Commando & SAS Officer.
In his spare time Neil leads adventurous expeditions all over the world (30+ and counting). He has completed the Explorers Grand Slam - climbing the highest mountain on each continent and skiing to the North and South Poles.  He is the first person to jet ski around the UK, has made twelve first ascents in Greenland and he piloted a flying car from London to Timbuktu.
Neil is an accomplished speaker who wins over his audiences with modesty, humour and by sharing his unique life experiences.  He has spoken at conferences of up to 2,000 people and to organisations such as the Bank of England, British Telecom, Centrica, Coca Cola, Cranfield MBA, ECB, Fitness First, Halliburton, McKinsey, Morgan Stanley, Nestle and Sport UK.
"Neil is an inspirational speaker. He has a fascinating story to tell and draws relevant lessons from both success and failure.' Nokia Telecommunications
'Your lecture was extremely well received and rated very highly by the delegates. "Inspirational" was a word used often to describe your talk on our evaluation forms.'  NHS Education South Central
'Neil is a maverick who has certainly lived life to the full. We very much enjoyed listening to his tales of mountaineering in every continent.'  Carphone Warehouse
'You will be delighted to hear that I received emails and spoke to many who really enjoyed Neil's view of one of the remoter ends of our planet. A really interesting presentation.'   Bank of England
Read More