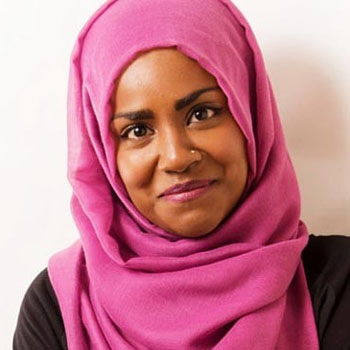 Winner of the Great British Bake Off 2015, Nadiya Hussain is now an award winning baker, author, broadcaster and presenter. She epitomises the idea that self-belief, resilience and hard work will see your goals realised.

She was named MBE for her services to broadcasting and culinary arts and her contributions to the industry are undeniable. Down to earth and humble, Nadiya instantly connects with audiences as an after dinner speaker, sharing her success journey and inspiring others with her entertaining cooking demonstrations.

Nadiya stepped into the spotlight in 2015 as the series six winner of The Great British Bake Off . She was a timid baker lacking self confidence in the early rounds of the competition, but developed into a star with her bakes not only tasting delicious but also being true masterpieces of design. By the final episode, viewers and fellow competitors were all rooting for Nadiya whose winning speech moved cook Mary Berry to tears, as she encouraged everyone to believe in themselves and pursue their dreams.

Plagued with an anxiety disorder for all of her adult life, the prospect of going on the show was not an option in Nadiya’s mind. However, inspirationally, she embarked on her first ever solo trip into London for filming and ultimately battled her fears head on to achieve her dreams.

Since 2015 Nadiya has now fronted over ten self titled series including ‘Nadiya’s British Food Adventure’ and a vulnerable documentary ‘Nadiya: Anxiety and Me’. Her family style cookery programmes have seen her gain the Women in Film & Television Awards Presenter Award, and the Food & Drink Awards Personality of the Year.

Thirteen published books to date, a selection of cookery, novels and children’s stories and a regular column in The Times, Nadiya has solidified herself as a multi talented star of the media.