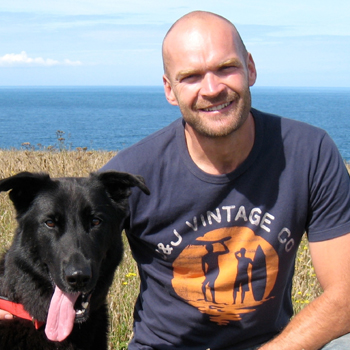 Well known as a BBC television presenter, Monty has worked for over a decade in partnership with organisations large and small as a speaker of the highest quality.
As an ex-Royal Marines Officer, a broadcaster, explorer and writer, for over twenty years Monty has led international teams through some of the most demanding environments on earth. He has worked for Nelson Mandela as part of the peace process in South Africa, was awarded the Bish Medal for services to exploration, and for the last decade has specialised in delivering thought-provoking and highly amusing presentations about performing under stress.
His television career began when he won Channel Four's Superhuman competition in 2004. Since then he has presented series and documentaries for the Discovery Channel, The National Geographic Channel, BBC1 and BBC2, Channel 4, and the History Channel.
Other projects have been on the west coast of Scotland, where he lived in a tiny bothy on a beach for six months, following in the footsteps of his hero Gavin Maxwell. This series aired on BBC2 in 2009 as "Monty Halls Great Escape".  "Monty Halls Great Hebridean Escape" in 2010 recorded Monty's six months as a nature ranger in the Outer Hebrides.
"Monty Halls' Great Irish Escape" was followed by Fisherman's Apprentice in 2012.  Monty then settled in Dartmouth, Devon to set up his own eco-tourism business. The trials and tribulations of establishing and running this were chronicled in his Mail Weekend Magazine column and has provided Monty with a fresh perspective on the rigours of the modern business environment as demanding as any jungle or desert.
Running the business has been combined with leading a series of expeditions to various locations overseas, including leading a group of divers as they enter the water with feeding sharks off the coast of Natal.

Monty's new series comes out on Channel Four this Summer Called “My Family and the Galapagos” it explores the issues that affect us all - how to keep moving forwards in a world that is changing so rapidly. The Galapagos is the home of evolutionary science, and covers the need to adapt to ever changing environments.

Monty’s new talk explores these themes. With turbulent times ahead - the complexity of Brexit, and escalating trade wars - this talk addresses the work-force of today, one that is more engaged with interacting in a positive way with the world around them

Monty continues to be in tremendous demand as a speaker. Based on over two decades of success on the circuit, he remains one of the most dynamic, energetic, and well-received speakers in Britain today. Drawing on his experience leading teams in some of the most demanding environments on earth, he backs up his core messages with footage and images from some of the best adventure film-makers and photographers in the business. The result is a presentation that combines great entertainment with salient messages for any business or team. The consistent feedback is that this is a different experience from the standard leadership or team building presentation, something genuinely thought provoking, relevant, yet hugely entertaining.
"Monty delivered an inspirational talk covering leadership, team building and the diverse marine environment on Ireland's West Coast, to out Citi Worldlink Conference. Our colleagues loved the presentation, left with abundant smiles, and happily recall the event. We would not hesitate to book Monty again and can't recommend him highly enough."  Citibank
"Monty finished off the evening perfectly. We have had some really great feedback and everyone I have spoken with really enjoyed his speech. His genuine passion for marine biology and all things water related really comes through and it makes his presentation so enjoyable (not just a 'rehearsed' speech)."  Events and Conferences Manager, Institute of Marine Engineering Science & Technology - March 2013
“A massive thank you to you for organising for Monty to attend our conference. It was a first class event and Monty rose fabulously to the occasion. Everyone has raved about his speeches and what an amazing communicator/speaker he is. We will definitely be booking Monty again in the future and he already has some ideas about what type of speech would benefit us next. In summary - a very special day with our aims achieved.  Sunlight
“I first saw Monty a few years ago at a large corporate event where he spoke in front of a thousand people.  His ability to entertain, engage, and inspire made a big impression, so when I wanted a speaker at a much more intimate customer dinner for senior execs, Monty was my first choice and he delivered in spades.  His life experiences and his ability to converse on such a wide range of subjects, coupled with his enthusiasm and wit, make him the perfect after dinner speaker.  Monty is a true raconteur, incredibly grounded and a great bloke.  Nolio Software
"I just wanted to drop you a quick line to say how well Monty was received last week...the feedback suggests that he was one of the most preferred speakers of the day (if not THE most preferred in some cases!). He was also an absolute pleasure to work with too very accommodating and approachable. I will certainly recommend him for future events."  Brilliant Events  - Monty spoke at the RBS conference
Read More