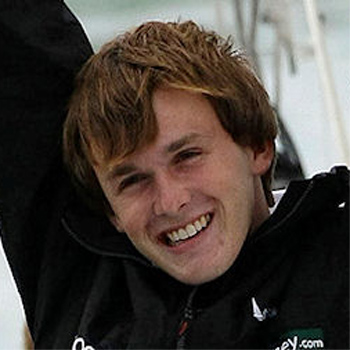 Born on 16 March 1992, from a very early age Mike has always had a taste for adventure.
When he was little he started exploring the hills and mountains of the Lake District, Peak District and Brecon Beacons with his parents. He put on his first pair of skis when he was five and went whizzing off down the slopes. He started sailing at the age of seven and has never looked back.

Channel 4's Cutting Edge documentary THE SCHOOLBOY WHO SAILED THE WORLD followed 16 year old Mike, who filmed himself during his battle with the elements to become the youngest person to sail single-handed around the world.  He has written a book a book about his amazing journey, called Sailing the Dream, published in March 2010
Time magazine considers Mike to be one of the greatest heroes of 2009.
Mike is currently planning his next adventure for 2011 which is under wraps at the moment, but will be as challenging and thrilling as his last voyage!
He may be young in years but in life he has experienced some incredible and daunting challenges which make him a sought after motivational speaker for audiences of all ages and he is a popular choice for corporate engagements

One of his favorite catchphrases is that "you are only as big as the dreams you dare to live" and he hopes that through his adventures he will be able to inspire other young people to get out there and live their dreams.
More information about Mike can be found on his website www.challengemike.com