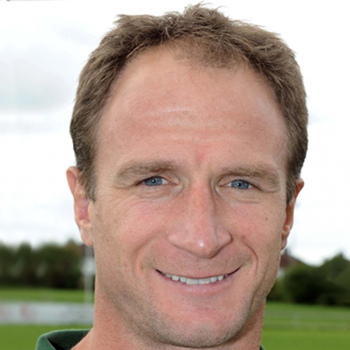 Mike Catt MBE had an exceptional rugby career for Bath, London Irish and England. Widely regarded as one of the best strategists in the game, Mike now uses his vast rugby knowledge in his role as the London Irish Attack Coach.
Born in South Africa, he went to Grey Junior and High School in Port Elizabeth and represented Eastern Province, but played senior rugby in England. He joined Bath in 1992 and stayed there for 12 years where he played 220 games and scored 64 tries.
He joined London Irish in July 2004. His outstanding form for the Exiles resulted in him receiving the 2005-06 Player of the Season Award at the club's annual player awards. He was also named Guinness Premiership Player of the Season for 2005-06.
Playing at either fly half or inside centre Mike has had a major influence on the London Irish playing style over the past five seasons during which he has made 89 appearances for the club and scored 79 points, including eight tries, in the process gracing many famous rugby arenas in the UK and Europe.
In July 2007 he changed role from player to coach as he took on the responsibility for coaching the club's talented backs. He was appointed Attack Coach a year later.
Mike made his debut for England in 1994 against Wales, going on to experience a roller-coaster ride around the England backline, playing at full back, fly half and centre. He was part of England's 1995 Grand Slam winning side, and played in the 1995 Rugby World Cup.  While touring Argentina with England in 1997 Mike was called up as an injury replacement for the British and Irish Lions tour to South Africa and played in the final test. Four years later he was selected for the Lions squad that toured Australia. His 75 international caps have included a crucial role in winning the 2003 Rugby World Cup. He was awarded an MBE in November 2003 for his part in that success. He also played five games in the 2007 Rugby World Cup including the final against South Africa.
Mike's experience as captain and coach for club and country makes him a popular contributor on TV and radio shows. Mike writes a regular column in the Sunday Telegraph and enjoys his role as Brand Ambassador for Clydesdale Bank. Mike is an inspirational after-dinner and motivational speaker and available to host award ceremonies.
Read More