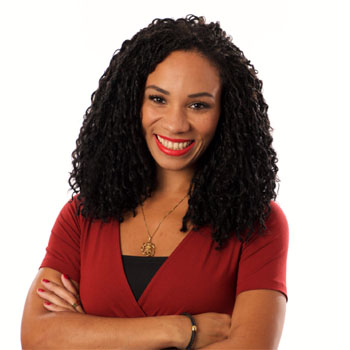 Michelle joined the BBC as a programme maker in 2005 and went on to present Totally Rubbish for CBBC as well as making guest appearances on many popular children’s series.

After a number of years honing her skills at CBBC, Michelle has since gone on to present many TV shows across multiple genres including Entertainment, Children’s, Factual & Current Affairs. She also regularly hosts The One Show alongside Matt Baker.

Her work across TV continues to gain pace as she’s gone on to present UKTV’s luxurious property series Fantasy Homes By The Sea, C5’s World’s Strongest Man, BBC's Fake Britain alongside Dom Littlewood and the hugely popular BBC Daytime series NHS Fraud Squad. Michelle has also recently presented a brand new series for C5, The Wonderful World of Crafting, which sees passionate crafters up and down the country given the opportunity to transform their hobby into a business.

Michelle is also an ambassador for Smart Works and works as a diversity youth mentor working closely with teens that have recently left the care system. An inspiring speaker.