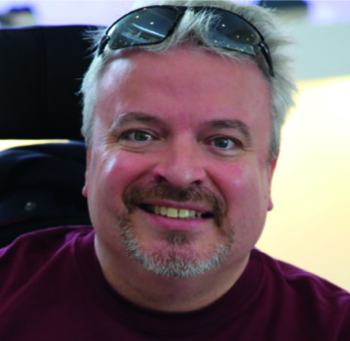 After being diagnosed with muscle wasting disease Muscular Dystrophy (MD) aged just 18 in 1984, Michael made history 20 years later by becoming the first disabled person to lead expeditions to the north and south poles.
The journey gave rise to a new life plan, inspiring Michael to embark on a career as an internationally recognised motivational business speaker. He has built an enviable list of clients, providing carefully tailored speeches for organisations including Virgin, PwC, Shell and the NHS.
Leadership, courage and trust combined with resolute self-belief, confidence, teamwork and a singularly focused obsession towards achieving desired outcomes were critical success factors Michael draws on these experiences, giving wider business and life lessons.
Michael also used his Arctic adventures as a launch pad for The Muscle Help Foundation, a unique national family charity that delivers highly-personalised experiences, known as Muscle Dreams, for children and young people with MD. Michael is affectionately known as the Chief Muscle Warrior; he is a Founder and the CEO.
This multi-award winning charity has delivered more than 200 transformational Muscle Dreams, helping children realise cherished ambitions, including training with the England football team and interviewing Al Pacino. MHF‘s profile is growing and in 2015, the charity was named the Mercedes AMG Petronas F1 Team‘s official Charity Partner for 2015/16.
Michael‘s work was recognised in the Queen‘s Speech 2004, when Her Majesty praised his “contribution to national life.
In 2005, Michael received the prestigious Business Traveller of the Year Award presented to him by Kate Adie in Dubai.
He was also a Paralympic Torchbearer in 2012 and four years later, he was named one of the most influential disabled people in Britain, featuring in the Power 100 2016.
Prior to Michael‘s expeditions to the North and South Poles, he was an influential figure in hospitality. He remains diligently engaged with the industry having served as a Disability Ambassador for Hilton Hotels, while he also volunteers as a judge on the prestigious Cateys Awards.
Michael has received recognition and awards for his work in business, his charity and his record-breaking polar adventures. Named one of Britain's most influential disabled people in the 2016 Power 100.
“Michael McGrath is a phenomenon. He shares lessons in leadership, lessons in handling change and lessons in life, introducing audiences to the possibility of thinking and acting differently  Sir Kenneth Branagh
“My grandfather Ernest Shackleton listed the qualities he looked for in a polar explorer as optimism, patience, imagination, idealism and courage. I believe that Michael possesses all of these  Rt. Hon Alexandra Shackleton
“Michael is a truly inspirational speaker whose personal story and courage encourages all leaders to reflect on their own approach, think about the way they engage with those around them and focus on what‘s possible in life  Standard Life
“It is not often that speakers get standing ovations and yet Michael inspires that in people. Always well prepared, always on message and always professional. I look forward to further opportunities to work together  Leadership and OD Manager, Health Education East of England, NHS
Read More