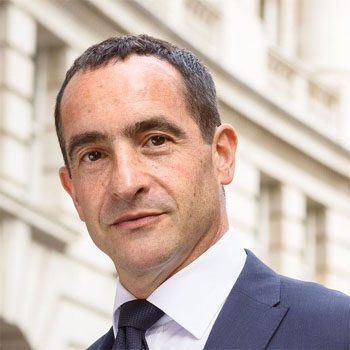 Michael Liebreich is a leading global expert on clean energy and transportation, smart infrastructure, technology, climate finance and sustainable development. He is also the Chariman and CEO of Liebreice Associates.

Michael Liebreich is Chairman and CEO of Liebreich Associates, through which he provides advisory services and speaks on clean energy and transportation, smart infrastructure, technology, climate finance and sustainable development and has recently joined Sustainable Development Capital LLP (SDCL) as a Senior Advisor.

He founded New Energy Finance in 2004 and was Chairman and CEO until the sale to Bloomberg LP in 2009. He remained CEO of Bloomberg New Energy Finance, until 2014, then became Chairman of the Advisory Board; since the start of 2018 has been a Senior Contributor. Between 2012 and 2018 Michael was a Board Member of Transport for London, where he sat on the Finance Committee and chaired the Safety, Sustainability and HR Panel.

Michael serves on a number of advisory boards, including GreenMap Association, WWF Switzerland, The Hawthorn Club, an international network for professional women in the energy industry, Women in Sustainability Environment and Renewable Energy (WiSER), the OECD Centre on Green Finance, Imperial College’s Masters programme in Climate Finance and Management, Carbon Limiting Technologies Sustainable Technologies Fund, Ignite Power, a fast-growing provider of distributed solar power in Africa and most recently, Equinor’s International Advisory Board and In April 2019 he resigned from the Advisory Board of Shell New Energies. He is also a member of the Strategic Committee for the World Alliance for Efficient Solutions (Solar Impulse Foundation), a member of the selection committee for the Bloomberg New Energy Pioneers, a programme he created in 2008 and chaired until 2014 and recently became a member of the High-Level Observer Group for the Hydrogen Council and the UK Green Growth Fund.

Between 2008 and 2017 Michael served on the high-level advisory group for the UN Secretary General’s Sustainable Energy for All initiative. He was the founding chairman of Finance for Resilience (FiRE), an accelerator of climate finance solutions, and chaired St Mark’s Hospital Foundation, a bowel medicine charity, between 2010 and 2017. In the past he has served on the World Economic Forum’s Global Agenda Councils on Sustainable Energy and the New Energy Architecture and been a member of the selection panel for the WEF Technology Pioneers and the advisory board of Abu Dhabi Sustainability Week. He has also served on the advisory boards of the Clinton Global Initiative Energy and Climate Change Working Group, and Business for Britain.

Michael has testified to numerous US Senate, UK and EU Parliamentary groups and committees. He has addressed the UN General Assembly, the Clean Energy Ministerial and a variety of other governmental and multilateral bodies. Michael’s writing frequently appears in the international and trade press. He is the co-author of three peer-reviewed papers and of the Complete Skier (BBC Books, 1993).

Michael is an inspiring speaker at corporate events. Keynote topics as below:

Geopolitics of the energy transition