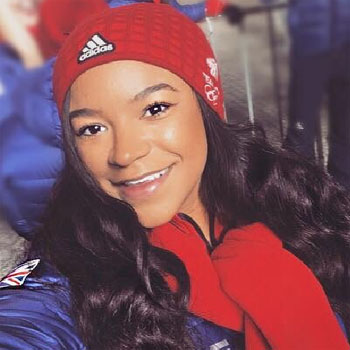 At the age of 14, Cardiff born Mica began to develop and specialise her sprinting interest by joining the local athletics club Newport Harriers where she excelled and started to win regional and Welsh National Honours at both 100m and 200m.

When she was 15 Mica moved her allegiance to Cardiff Amateur Athletic Club and continued to develop as an athlete specialising in 100m, 60m, 200m and 4x100m relay.

At the age of 16 Mica’s Dad, Lawrence, became her coach and during these early stages of their coach / athlete relationship she represented the GB Junior 4x100m Relay Team in the European Junior Championships in Estonia.

After completing her A Levels Mica went to Cardiff Metropolitan University to study Sport and PE during which time, mica became one of their most successful and medalled athletes in history winning multiple medals gold, silver and bronze both indoor and outdoor at 60m, 100m, 200m and relays in the British University Championships .

During this time Mica established herself as the first choice 3rd leg runner in the Welsh National 4x100m relay team and indeed was so valued that she was made captain of the team. After a number of outstanding performances at Grand Prix events, International Competitions in Switzerland, the Loughborough and Welsh International and with several Welsh National relay records being established, Mica along with her team mates was selected for the 2014 Commonwealth Games in Glasgow for the 4x100m relay. The girls performed well above their world ranking in finishing 7th in the final and yet again breaking the Welsh record.

In 2016 she was invited to a bobsleigh talent ID performance day when the BBSA identified her potential as a brake woman. Mica performed above and beyond their and her expectation and after a further testing event which she finished in first place was accepted on to the Bobsleigh programme.

During her first season with her pilot Mica McNeil they won silver and bronze medals in the North America Cup, gained top 10 places in IBSF World Cup Races and incredibly, won the IBSF World Junior Bobsleigh Championships in Winterberg, Germany in January 2017.

This success meant that Olympic qualification was a real tangible prospect. Mica, throughout a number of testing events in the summer and early autumn firmly established herself as the #1 brake woman for the GB Team and indeed set the highest ever score by a brake woman in the September testing event.

However, at this time the girls were issued with the devastating news that the BBSA were withdrawing their funding due to an overspend on the £5million Olympic Cycle Fund. Showing remarkable resilience, innovation, accountability and initiative they decided to launch a crowd funding appeal to enable them to sustain their Olympic dream.

Incredibly, £40,000 was raised from incredible generosity of the Great British public and donations from around the world.

This meant that the girls could now take part in the IBSF World Cup Season in North America, Canada and Europe to cement their qualification for the Pyeongchang 2018 Olympics. They had a successful season with an all-time record 5th place in the Calgary leg of the World Cup. In December on the European Leg of the World Cup Season they finished 3rd in the European Championships.

At Pyeonchang on the 20/21st February the girls performed way beyond their world ranking of 12th to finish, after 4 runs in 8th place. The highest ever ranking by a female bobsleigh team.