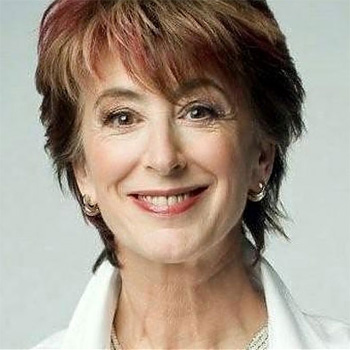 One of Britain's favourite actresses, to many people Maureen Lipman is Beattie from the British Telecom advertisements which won her an award for "You got an Ology?", but in reality she has done so much more.
She was born in Hull, Yorkshire and her father was a Jewish tailor. She was press-ganged into acting by her mother Zelma, who used to take Maureen to the pantomime and push her onto the stage. She studied at the London Academy of Music and Dramatic Art and made her acting debut in The Knack in 1969.
Since then she has appeared in a number of West End productions
In over 30 years in the profession Maureen has only been out of work for four months - and that was when she needed major surgery to remove a tumour at the top of her spine, which was threatening to paralyse her.
Maureen's film career began in 1967 when she played Sylvie in Up the Junction and this was followed in 1969 by School for Unclaimed Girls (aka Hell House Girls in the UK) in which she played Sarah; and Gumshoe in 1972 in which she played Naomi.
In 1973 Maureen appeared on television as Cathleen in Long Day's Journey Into Night and File It Under Fear. In 1974 she was Annie in Regan and in 1976 she was Freda in Rogue Male. 1978 saw Maureen in a TV series - A Soft Touch - playing Alison Holmes, but it was in 1979 when she really became a star when she played Jane Lucas in the ITV comedy series Agony alongside Simon Williams.In 1980 Maureen returned to the big screen playing Miss Higgs in The Wildcats of St Trinian's and as Ena Lind in Dangerous Davies - The Last Detective.
In 1981 she was Brenda Weller in The Knowledge; in 1982 she was Stella Craven in Smiley's People. That year she also played Maggie in the TV play Outside Edge. Another big role for Maureen came in 1983 when she was Trish in the film Educating Rita, for which she won an award for best-supporting actress.Maureen's television and film career continued in 1985 with Water, playing Prime Minister; Love's Labour's Lost, as The Princess of France; Absurd Person Singular, as Jane Hopcroft; Absent Friends, as Marge; and National Lampoon's European Vacation, playing Lady in the Bed.
In 1986 she was Miss Minchin in A Little Princess; and Sheila Haddon in All at Number 20. She returned to film in 1992 when she played Countess Esmeralda in Carry on Columbus. 1995 saw the return of her most famous part of Jane Lucas in Agony Again; she then went on to play Shani in Eskimo Day in 1996; and Shani Whittle in Cold Enough for Snow in 1997. In 1998 she appeared in Captain Jack and she went on to play Aunt Eller in the television version of Oklahoma! in 1999, followed by the part of Rezl in Solomon and Gaenor.
Maureen was in Oklahoma! at the Royal National Theatre in 1998/9 playing Aunt Eller which she claimed took an unforgettable year out of her life. After the run at the National, the show was filmed and then did a five month run at the Lyceum in London. Her next stage appearance was in November 1999 playing the literary agent Peggy Ramsay in Alan Plater's play Peggy for You at the Hampstead Theatre Club.
However, she has written several humorous books, including How Was It For You? (1985); Thank You For Having Me (1990); You Can Read Me Like a Book (1996) and Lip Reading (1999) which is another collection of random stories of a chaotic lifestyle. She also writes a monthly column for Good Housekeeping magazine.
Maureen released a video in 1996 - Live and Kidding - which was filmed at the Leeds City Variety Music Hall before a packed house. The programme of anecdotes, observations, jokes and confessions includes an homage to her heroine Joyce Grenfell.
Maureen was married to playwright Jack Rosenthal from 1973 until his death and they had two children - Amy and Adam.  In 1999 Maureen was awarded a CBE by the Queen.
In 2001 Maureen returned to the West End stage when she appeared in The Vagina Monologues. Eve Ensler's thought provoking and witty series of stories dealing with the ins and outs of the female genitalia and collected during interviews with hundreds of women, attracted a multitude of celebrities to the stage for its 1998 off-Broadway premiere including Winona Ryder, Glenn Close and Whoopie Goldberg as well as winning Ensler an Obie Award.
She continues to appear on stage and screen, and achieved a lifetime ambition of having a role in Coronation Street, where she played an overbearing bar maid in the Rover's Return.
Read More