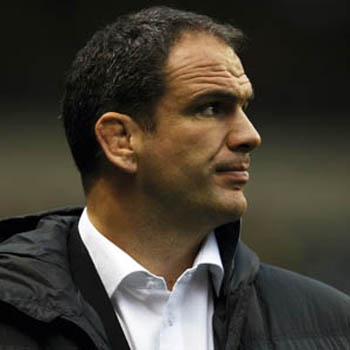 Martin Osborne Johnson CBE  is a former rugby union footballer who represented and captained England and Leicester. He is mostly known for captaining England to victory in the World Cup in 2003. He became the new England team manager in July 1st 2008,  replacing the previous manager Brian Ashton. Regarded as one of the greatest locks to have ever played, he toured three times with the British and Irish Lions, becoming the only man to have captained them on two separate tours. He also led his club Leicester Tigers to back-to back Heineken Cup victories and won the league six times. Despite no coaching experience, he was appointed team manager of the national England rugby Union side in April 2008.