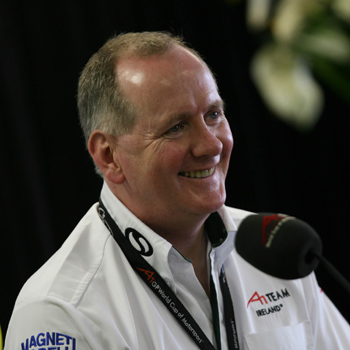 Having been involved in Formula One for over 25 years, Mark Gallagher is widely respected within the industry and is currently head of Cosworth's Formula 1 Business Unit. He was Team Prinicipal for the Irish team for the A1 GP motor sport, who in the 2008/2009 season emerged as world champions.
A former member of the senior management team at Jordan Grand Prix, confidante of team principal Eddie Jordan as well as drivers past and present, Mark understands the key issues involved in being a winner in this most demanding of high technology sports.
Combining his media broadcasting background with his vast knowledge of the inner workings of Formula One he has become one of the most prolific speakers from the exciting world of Grand Prix racing.  He is a sought after motivational speaker.
Leadership, motivation, teamwork and the use of technology to gain competitive advantage are just some of the areas where Mark has gained a unique insight.
In the 1980s Mark was a journalist covering Formula One for the Sunday Express, as well as a regular broadcaster on television and radio. He spent nine years at Jordan Grand Prix,  heading up the marketing and communications department. During this time, Mark was best known as Eddie Jordan's confidante and the team were described as 'the most motivated team in Formula One'. After leaving Jordan Mark joined the management team behind British Formula One star Jenson Button before accepting an offer to head up sponsorship and commercial negotiations for Jaguar's fast-improving Formula One team.

During the 1980s Mark was a leading correspondent for motor racing publications and in the 1990s was involved in the British and World Rally Championships, with the Prodrive Subaru and Ford Motorsport  teams.

A well known face in the Formula One paddocks around the world, Mark gives a fascinating insight into the world of top level motor sport, drawing parallels between the challenging, high speed environment of Formula One and the fast-paced business world of today.
As an F1 industry expert, Mark is also a regular commentator on Sky News and Sky Sports News in Europe.

"Mark was very well received on our management event focussing on leadership. His experience in Formula One related very well in terms of the issues concerning team building, motivation and having a clear vision for the organisation."  HM Customs and Excise
"Your presentation on The Power of Change was stimulating and entertaining, and the international audience was intrigued to find out more! It goes without saying that your passion for the subject matter was infectious."   UK Sport
Read More