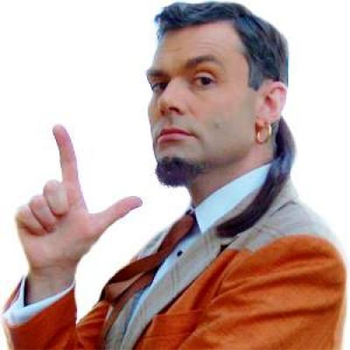 L. Vaughan Spencer is the hilarious award-winning alter ego of Neil Mullarkey, the comedian you'll recognise from Austin Powers movies and Britain's top improv troupe The Comedy Store Players.
L-Vo, as he likes to be known in a J-Lo kinda way, first arrived in a show called Men Are From Mars, Neil Is From Surrey, in which Neil played L-Vo (aka The Gangsta Motivator because of his brilliant motivational raps) as well as some unfortunate people who had been to L-Vo's Succeeder Workshops. But audiences wanted to believe in L-Vo, so the other characters disappeared and the show became Don't Be Needy Be Succeedy.
Joking aside, he deftly weaves all your conference messages and key learnings into his performance. He incorporates references to your people and all your favourite lingo.
L-Vo's words have special resonance for anyone who has ever encountered management training, personal development or someone who's too big for their boots. He will inspire, motivate, entertain and, most of all, make you laugh.
L. Vaughan Spencer can help you make a hilarious corporate message. Think video, podcast, blog, voicemail message, company anthem, site-specific succeedy situation and much more.
Neil can also appear as himself in tandem with L.V as he runs workshops using improvisational theatre to enhance people's skills in communication, leadership and innovation.
Neil has been coaching business leaders for more than ten years, using improvisation techniques to enhance their communication and creative skills. In business there is no script, every conversation with colleagues and clients is to some extent an improvised scene. There are countless communication coaches. Plenty of creativity trainers and leadership gurus. There are improv experts tackling these issues... even some inspiring and funny speakers. And then there is Neil Mullarkey. (Mullarkey is his real name). Neil has appeared as both L. Vaughan Spencer and himself at different sessions at the same conference to great effect.
"He went down very well and the crowd very much enjoyed the show.  The parts that were tailored to the audience/company naturally went down the best. He was very good feeding off certain people down the front and improvising from their responses. Overall, a great night and I would book Neil again as L-Vaughan Spencer."   Universal WorldEvents/Zaltrap Product Launch  - February 2013
"At Hill & Knowlton, we had the pleasure of working with Neil Mullarkey as part of the programme we put together for a Fortune 500 client's UK senior leadership conference.
First, he appeared in the role of L. Vaughan Spencer - billed as a 'serious management guru', as the after-dinner speaker at the end of Day 1. Neil's entertaining and interactive performance surprised and really engaged the audience, with lots of laughter and quite a few winces of self-recognition, as he used the 'corporate speak' language and pomposity of many management books - combining it with music and rap.
On Day 2, Neil re-appeared as himself to run a short and very effective leadership communication workshop. This enabled Neil to explain some of the approaches he'd used the night before in character, to show why they worked, and then to help the senior managers to understand how they could use some of the 'improvisation' skills in story-telling and working with an audience in their own day-to-day work environment.
This was a tough senior management group and veterans of many conference entertainments and workshops. Neil worked to understand the organisation and was then able to tailor his sessions to fit with the conference goals.
Neil's unique skills in performance, and in being able to understand and apply improvisation in the business world, generated good humour and fresh insights in his audience that are lasting well beyond just another conference dinner. I have no hesitation in recommending Neil .
Hill & Knowlton
"My favourite live business spoof of the year. The perfect antidote to the endless bogus management consultants and coaches who ply the corporate circuit. "  The Sunday Telegraph.
Read More