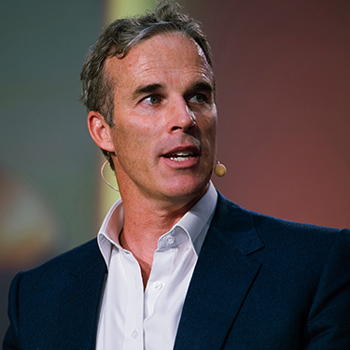 Lewis Pugh has addressed and inspired many of the world's leading companies.  Coca Cola chose Lewis to address their world-wide leadership team on their 125th anniversary and when Unilever wanted to double the size of their business and halve their environmental footprint, they chose Lewis to speak to their management team. When Microsoft needed to become more customer-centric, they picked Lewis to speak to them about the Radical Tactical Shift that enabled him to complete the first swim across a glacial lake on Mt Everest.

As an environmental campaigner, maritime lawyer and endurance swimmer, Lewis puts his hard learned lesson into the context of a corporate environment. His message is highly relevant, inspirational and, most importantly, actionable towards achieving your own impossible.

Lewis is the only person to have completed a long distance swim in every ocean of the world. In 2007 he became the first person to undertake a swim across the icy waters of the North Pole. In fact, he has pioneered more swims around famous landmarks than any other swimmer in history. Each of these seemingly impossible feats were done to raise awareness about the vulnerability of water and its importance to humanity. And he won't stop there. He continually redefines his own impossible, in the same way that any company must, in an ever-changing world.

Lewis's speeches have received widespread acclaim. His speech on leadership at the BIF Conference in Rhode Island was voted as one of the 7 Most Inspiring Videos on the Web. His speeches at TEDGlobal have been viewed by over 2.5 million people.

He has received a number of awards including France and South Africa's highest honours and the Freedom of the City of London.

In 2010, the World Economic Forum named him a Young Global Leader for his "potential to contribute to shaping the future of the world through inspiring leadership."

His autobiography Achieving the Impossible is a bestseller and was chosen for Oprah's Exclusive Book List.

Lewis's speaking topics focus on Achieving the Impossible; Vision; Goal setting;  Planning and preparation; Motivation and inspiration; Leadership; Teamwork;  Power of the mind; Self belief; Overcoming obstacles and setbacks; Risk; Protecting the environment; Change and The pursuit of excellence.

"Thank you for such an inspirational and awe-inspiring speech at our 200th Anniversary celebration."  Lloyd's Insurance

"Your address was the perfect close to a conference centred around achievement and moving to the next level. The story you have to tell is incredibly unique and was delivered in such a professional and entertaining manner. Everyone was inspired by your extraordinary journey". CEO, Deutsche Bank (UK)

"Thank you for coming to speak to us. You have a very special gift. Not many people can speak to a group of world leaders like you did - with so much authority and passion. I could have heard a pin drop."  Ted Turner, Founder of CNN

"Lewis Pugh gave the perfect TED talk: a little bit of action, some thinking outside the box, humbling words on the need to respect nature, a happy ending. A Hollywood scriptwriter could not have structured it better."   The Financial Times

"I cannot thank you enough for your speech at our Leadership Conference. It was absolutely remarkable and your message was a moving and emotional experience. The incredible scale of endeavour, the meticulous preparation, and the emotional magnitude, came through so crisply. Not only are your achievements so incredible and inspiring, but your ability to put them across in such a special way will no doubt have a lasting impact on our leadership team."   CEO, Discovery Holdings

"Lewis Pugh doesn't tell us what to do, he shows us what can be done."  Bill Clinton