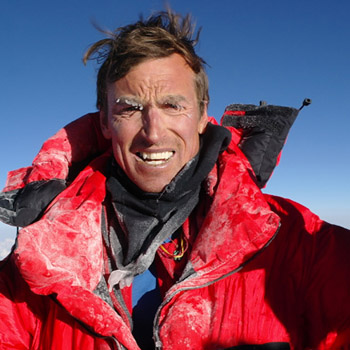 World Mountain Guide, Mountain Climber, Ice Climber, Adventurer, Public Speaker, Broadcaster and 2012 Olympic Torch Bearer - Kenton Cool is one of the world's leading alpine climbers with 10 Everest summits to his name, along with many other incredible feats.
His list of achievements continues to grow:
Kenton Cool graduated with a BSc from the University of Leeds in 1994 after studying Geological Sciences.
He first discovered mountaineering when, as a Scout, he read about Sir Edmund Hillary and Tenzing Norgay's first ascent of Mount Everest in 1953. An obsession with rock climbing followed when he was at Leeds University and, after graduating and moving to Sheffield, he pursued his climbing ambitions further.
But in 1996, he suffered a fall from a rock face and shattered both heel bones. After a year of surgery and therapy he managed to regain his climbing form and joined the British Mountain Guides scheme.
Kenton Cool is now based in the Alps and Greater Ranges of the Himalaya as a fully qualified IFMGA Guide and Expedition Leader.
"Your presentation was right on the nail for what we were looking for, very good delivery, very balanced. The way you knitted your experiences & team values back to the subject worked well. I have had a huge amount of feedback saying not just how inspirational it was, but also how relevant it was to the challenge that we have set the team this year."  CEO, NTT Com - January 2014
Read More