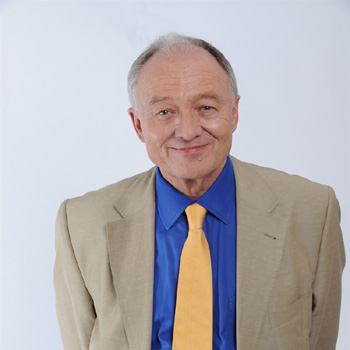 Ken Livingstone is a great after dinner and conference speaker on business and politics. Born in Lambeth, London in 1945 he was educated at Tulse Hill Comprehensive School.

Ken has twice held the chief executive office in London local government. Firstly, as leader of the Greater London Council from 1981 until the council was abolished in 1986 by the government of Margaret Thatcher. Secondly, as the first Mayor of London, a post he held from its creation in 2000 until 2008. He also served as Labour Party Member of Parliament for Brent East between 1987 and 2001.

He was initially elected to the post of London Mayor as an Independent candidate after the Labour Party chose not to nominate him as their candidate in the first mayoral elections. In January 2004, he was re-admitted to the Labour Party. He stood as the official Labour Party candidate for Mayor in the June 2004 elections, which he won. On 1 May 2008 Ken was defeated in his second bid for re-election  by the Conservative candidate Boris Johnson, and his term as Mayor of London ended on 4 May 2008.

One of Ken's greatest challenges as Mayor of London was dealing with the city's ageing transportation infrastructure. Ken introduced many schemes including bendy buses, Oyster cards and the congestion charge.

Ken also made a significant effort to reduce London's impact on the environment and he set up Britain's first register for same-sex couples. While falling short of legal marriage rights, the register was seen as a "step towards" such rights. Legal status was later passed by the government through the Civil Partnership Act 2004 and subsequently the Marriage (Same Sex Couples) Act 2013.

After his period as Mayor,  Ken joined the radio station LBC - London's Biggest Conversation - as a presenter where he regularly shares a studio with David Mellor. He also writes a weekly blog and is a regular contributor for The Guardian. He is a popular and fascinating corporate speaker who remains passionate about London, and still plays a role within politics.