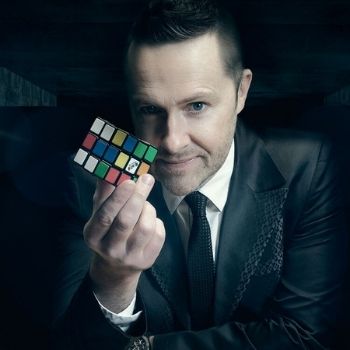 Keith Barry is one of the world’s leading TV hypnotist, brain hacker and mentalist. His extensive skills have been showcased in over forty international television shows, which includes his most recent series titles The Keith Barry Experience.

He starred in  ITV’s hit show You’re Back in The Room, which garnered impressive audiences and led him into also featuring in the US and Australian versions of the same format.

Keith has also charmed the likes of US hosts such as Jimmy Kimmel, Conan O’Brien, and Ellen DeGeneres on their respective shows as well as various celebrities including Bono, Nicole Scherzinger, Woody Harrelson, Morgan Freeman to name a few.

If you’ve seen the hit film Now You See Me, you’ll know of the impressive and mind blowing tricks performed within, what you might not know is that Keith was the chief mentalist and hypnotist consultant – working alongside Morgan Freeman, Jesse Eisenberg, Mark Ruffalo, Michael Caine and Isla Fisher.

His keynote speech Mind Magic has sold out in venues in UK, US, Canada, Australia, Spain, South Africa and unsurprisingly his native Ireland. Mind Magic boasts an impressive 25 million views on TED talks media channels, having been constantly in the top twenty-five talks since 2008.

Keith’s corporate entertainment show is designed to astound and amaze the assembled audience and have them laughing until their faces hurt. During the show he will implant thoughts, extract thoughts, and influence the behavior of the unsuspecting audience. No-one is safe! In his keynote presentation Mind Magic Keith reveals to the audience how to tap into their subconscious minds to break through barriers, disrupt unhealthy thought patterns and exceed expectations, both in their business and personal lives. As a leading expert in influence and persuasion, he will also share information on how to communicate ideas more effectively using NLP strategies such as modelling, pacing, leading and yes-setting.

Keith also delivers virtual and live entertainment, where he blends together visual magic and brain hacking to blow the minds of anyone, anywhere in the world! A perfect mix of awe, comedy and information, Keith’s shows are packed with audience participation in which he will implant and extract thoughts as well as predicting behavior of the audience.