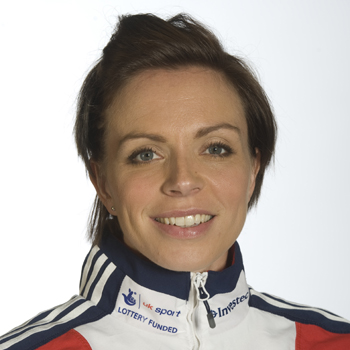 Kate Richardson-Walsh, is the most capped female hockey player in her country's history, and was captain of GB women’s hockey teams for 13 years. An inspirational and charismatic leader she has been widely credited for helping build the incredible team ethos and commitment that drove the GB team to a nail biting victory at the Rio Olympic Games. In winning gold Kate also made history in other ways, becoming one half of the first same-sex married couple to win an Olympic medal playing in the same team.

Having made her international debut in 1999, Kate has maintained elite performance levels for 17 years and made over 370 appearances for her country. After securing a bronze in London 2012, Rio 2016 was the Mancunian’s fourth Games and finally yielded the coveted Olympic Gold medal. Alongside her GB duties Kate has captained England for 13 years, winning the European Championships in 2015 and securing a bronze and two silvers in three successive Commonwealth Games.

As GB captain Kate was instrumental in helping to construct the team ethos and resilience that ultimately paid off in Rio. From a disastrous low of 11th place at the World Cup in 2014, a process of self-examination and rebuilding was instigated in which the team built and signed up to their own collective culture of behavior, created a sense of common purpose and installed a distributed leadership structure. Alongside this a process of learning through experience and collective reflection helped build a team that was able to adapt and withstand pressure whenever circumstances changed.

Shortlisted for the FIH World Player of the Year Award, Kate has also been GB Hockey’s Athlete of the Year, has twice won the prestigious Hockey Writers’ Player of the Year and was awarded an MBE in the Queen's honours list.
In 2013 Kate Walsh married Helen Richardson, her team mate since 1999. Adopting a double-barrelled name in the process, the ceremony was attended and celebrated by the rest of their team.

Having retired from international hockey following their Rio success, both are now set to join the Dutch club side Bloemendaal. Alongside this, Kate is determined to turn her experience towards coaching, encouraging the grassroots development of the game and applying the leadership and performance lessons of a career in elite sport. She currently serves as an ambassador for the Women’s Sport Trust, supports disability hockey as an ambassador for Access Sport, and sits on the British and European Olympic Athlete’s Commissions. With the pressures of international hockey behind her she is also looking forward to indulging a few of her other passions, including travel, fashion, cooking and a mild obsession with Manchester United.

Kate is an experienced motivational speaker and happy to host or deliver Q&As, keynotes and after dinners. She has a powerful leadership and team building story to tell and can speak on:

• Leadership and communication: building a winning mind-set and bringing out the best in people
• Team building: creating unity of standards, spirit and culture
• Maintaining peak performance
• Ambition and goal setting: effective planning, organisation and evaluation
• Change management: How to turn performance around
• High performance under pressure: performing at an elite level for 16 years
• Diversity and Inclusion
• Grass roots sport and inspiring a new generation