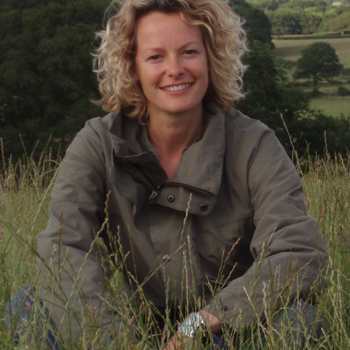 Kate Humble was born in London. After leaving school she travelled in Africa from the Cape to Cairo doing various jobs including working as a model, a safari driver and on a crocodile farm.
She returned to Africa in 1984 and travelled in Madagascar, the subject of her first article for The Daily Telegraph travel section. Kate has now travelled extensively researching, writing and presenting programmes from Holiday to The Abyss.

Kate started her television career as a production assistant and researcher, on programmes such as Parallel 9 and Animal Hospital. She joined the Holiday production team as a researcher but was soon asked to present her first report.

Kate has presented a number of travel programmes including Holiday on a Shoestring and Holiday - You Call the Shots which have taken her to such far-flung places as Nepal and Australia.

She has worked on a diverse range of programmes, reporting on rural issues for Countryfile and working with Rolf Harris on Rolf's Amazing Animals. She was co-presenter on Animal Park, filmed at Longleat Safari Park, and Top Gear. A stint presenting City Hospital saw her broadcasting live from from Guy's and St Thomas' Hospitals in central London.

Kate has presented a variety of science and wildlife programmes including Tomorrow's World and The Essential Guide to Rocks. She presented four series of Rough Science where scientists worked against the clock to complete challenges including building an underwater light and designing a spacesuit cooling system.

In 2002 and 2003, Kate explored the depths of the ocean in The Abyss, a day of live broadcasts exploring life at the bottom of the sea. The Abyss tapped into Kate's love for the sea and of diving as she was able to explore life at the spectacular Cayman Wall from the Atlantis submersible. During the dive, the crew used bait to attract a deep-water giant, the six-gill shark.

Kate joined Bill Oddie and Simon King to present Wild In Your Garden in 2003. A week of live broadcasts followed the lives of the animal residents of two Bristol gardens. During the week she investigated subjects such as the best way to watch mammals and how to identify bird song.

Her experience of working live and keeping a calm head when things don't go entirely to plan have stood her in good stead. She says that working as a presenter is, 'enormous fun and you get to do some great things, but it is incredibly hard work.'

Kate enjoys travelling both for work and pleasure. She is an enthusiastic and qualified SCUBA diver.