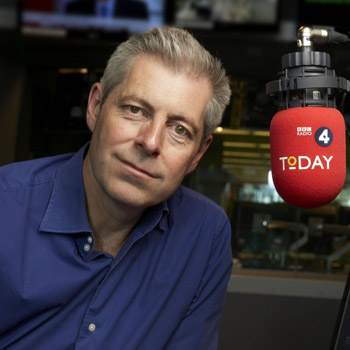 Justin Webb is a presenter on Radio 4's Today programme.

Previously he was the BBC's North America Editor, contributing to TV, Radio and web output. He was appointed in 2007, having been their chief radio and Washington correspondent since 2001.  He returned to the UK in 2009 to present Radio 4's Today programme.

Prior to this, he spent three years working as the BBC's Europe correspondent based in Brussels.

Justin joined the BBC as a graduate trainee in 1984 working in Northern Ireland for BBC Radio Ulster based in Belfast.

He then worked as a reporter for BBC Radio 4's Today programme, before becoming a foreign affairs correspondent based in London and covering news around the world.

From 1992 to 1997 Justin was a BBC News presenter based in London and the main presenter on BBC One's Breakfast News programme.

He then presented the BBC's One and Six O'Clock News bulletins and during this time interviewed many senior politicians including then Prime Ministers John Major and Tony Blair.

As a foreign correspondent Justin has reported on the first Gulf War and the war in Bosnia, the collapse of the Soviet Union and the first democratic elections in South Africa. In 1997 he covered the handover of Hong Kong to China, reporting live from the region.

Whilst working as the BBC's Europe correspondent he reported on the workings of the European Commission and Parliament, the politics surrounding Britain's decision on whether to join the single currency and the enlargement on the European Union.

Justin's experience of handling live television makes him an obvious choice for hosting corporate seminars.
"I wanted to thank you again for your after-dinner spot last night.  The audience were very generous in their praise and more than one told me it was the best after dinner speech they'd ever seen."  AFM Conference and Dinner, London - October 2015
"Justin was an excellent chair for our panel - he set exactly the right tone for the debate."  Manchester Business School - October 2013
"Justin was very professional, and kept the whole session moving smoothly. We shall have him back"  World Bank
“Justin was a star, he was incredibly open to suggestions and the clients loved him!"  Unisys on Justin Webb who spoke at business breakfast as part of their Open Golf sponsorship
Read More