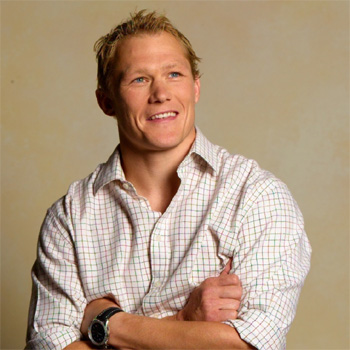 Josh Lewsey is a unique man. He has won the rugby world cup, graduated from Sandhurst, served as an officer in the Royal Artillery and has taken on the challenge of Everest. He‘s also worked as a Management Consultant with years of business experience, including roles at PwC, Citigroup and Head of Rugby at the Welsh Rugby Union.
He is a man with drive and focus, who understands how to achieve success. University educated Josh has a rare insight into a combination of elite performance environments. Not only does he know about winning and losing from his career as a professional rugby player, but he has the knowledge gained from his experience in the military and as an adventurer that if you don‘t work as a team, don‘t prepare, don‘t listen, don‘t adapt to changes going on around you, death is a reality.
Born in Kent, Josh went to school in Watford close to Saracens rugby club, but it was at London Wasps where he was to make his name.
At University in Bristol, he played for Bristol RFC before re-joining Wasps at 21 and didn't leave till the end of the 2008/09 season, having helped the club to four Premiership titles, two Heineken Cups and a European Challenge Cup success.
Although he could have played for Wales it was for England that Josh shone on the international stage. He was first capped at the age of 21 against Australia in 1998. He also appeared in all three tests in the summer 2001 tour to North America.
After deciding on going through the Royal Military Academy, Sandhurst, he graduated in 2001 and combined his rugby and Army careers with great success, before throwing himself 100% into his rugby.
In 2003 he has a key player in England‘s world cup campaign that saw Clive Woodard‘s team hoist the trophy. Still in great form in 2005, Josh toured with the legendary British & Irish Lions to New Zealand scoring two tries in 5 minutes against the Bay of Plenty.
Josh featured heavily in England‘s campaign to retain the Rugby World Cup in 2007, scoring the only try against France in the 14-9 victory which put England into the final. In 2008 Josh retired from international rugby.
An avid climber, Josh took on the challenge to climb Mount Everest via the difficult North Col route in May 2010. He got to within 500 feet of the summit when his breathing apparatus failed meaning he had to abandon the ascent.
Working in the City as a Management Consultant with PwC, Josh led a range of projects from strategy through to cultural change across different industries and was approached by the UK board to deliver a new Organisational Performance competency. He later moved to Citigroup working in their Global Markets division having two years on the trading floor. Observing significant inefficiencies, he embarked on a global review of the Equities asset class, providing astute insight and recommendations for systematic change. On the back of this, he was awarded the position EMEA Head of Business Advisory Services, which was to lead consulting services predominantly to the Hedge Fund and Institutional Investor community.
Recognised for this knowledge, his ability to drive change and understanding Josh‘s passion for making a difference to society through sport, he was approached to take the role of Head of Rugby of Wales in 2013. At the WRU he implemented strategic and structural change from the grass roots through to the national team on behalf of the WRU‘s executive board. Such changes have already had a significant impact, and have been described by senior individuals as the most significant change in a generation.
His speaking topics include:
Peak Performance
Preparation & Execution
Intelligence under Pressure
Building a High Performance Team
Comparing Organisation effectiveness (Military & Sport)
Read More