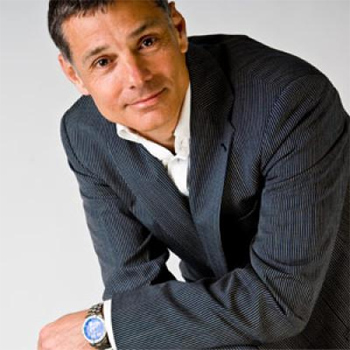 John Peters came to the world's attention in January 1991 when his bruised and battered face flashed onto television screens around the world. On the first day of the Gulf War, a British Tornado bomber crewed by John Peters and John Nichol was shot down over Iraqi territory and the two men were captured. After four days of mental and physical torture, they were forcibly shown on Iraqi television. It was John Peters' disfigured image that became a potent symbol of Saddam Hussein's ruthless aggression.
John's powerful and moving story focuses on how he coped with both the brutal physical and mental pressure inflicted on him by his captors. His dramatic and sometimes harrowing experiences reach deep into our innermost minds, showing us how we can overcome even our worst fears and nightmares.

A compelling speaker, John Peters inspires and motivates people with his dramatic account of his experiences during Operation Desert Storm. His war was not at all as he expected. It became a seven-week ordeal of torture and interrogation testing John Peters to the absolute limit and bringing him close to death.

The audience is absorbed into a cruel and ruthless regime, but John skillfully weaves his story so that they question their own focus, attitudes and determination to succeed. He describes how to adapt quickly to ever changing circumstances and how to overcome seemingly impossible odds. John, however, is certainly not a doom and gloom merchant. His innate sense of humour and superb timing ensures the audience sees the funny and lighter side of his experience.

He was the sole reader representing the British Armed Forces at the National Gulf Memorial Service, in front of Her Majesty The Queen and Heads of State; presented the 1999 Sir James Martin Lecture at the Royal Aeronautical Society in the presence of Prince Philip and subsequently at the SAFE symposium in Atlanta. Furthermore, he followed Mr Nelson Mandela on stage in South Africa and achieved a standing ovation. He has written two best-selling books and the documentary, 'Tornado Down' was Independent Documentary of the Year and a BAFTA Award Nominee in 1992. He has extensive international TV, radio, PR and media experience and has built up an international speaking reputation, including American, South African, Swedish, Maltese, French, German and Australian audiences.

His corporate credits include Nortel, IBM, Sony, Lloyds and The Royal Bank of Scotland and Peugeot cars to name a few. He has a Master's Degree in Business Administration and was responsible for a cultural change programme in the RAF. This initiative was awarded the 1999 Flight International Aerospace Industry Award for Training and Safety. Since leaving the RAF, he has established a corporate development company, specialising in leadership, teambuilding and communication and whose clients include Unipart International and Barclays Bank.

John Peters is superbly masterful when motivating and inspiring an audience, or when he enthralls guests after dinner or luncheon. They leave with an inspired sense of purpose, with a greater understanding of how to cope with unexpected change and how to drive through these difficulties to set and achieve real goals. The impact he has on an audience is reflected by the 75% standing ovation rate and overwhelming response he always receives after his presentations.

"Feedback from the event was universally positive. The delegates went away feeling inspired and capable to do their jobs". Glaxo Welcome

The best speaker I have ever, ever heard go anywhere to hear him he will make you laugh and cry he is magnificent!"
Lee Hurst - comedian