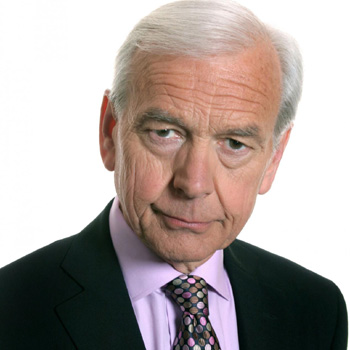 John Humphrys is one of Britain's best known and most controversial broadcasters.
He has been a journalist for more than half a century. He was BBC TV's youngest foreign correspondent and has anchored most frontline news and current affairs programmes on both television and radio.
He has won just about all the national broadcasting awards, including the “Oscar of Oscars: the Sony Gold Medal for Lifetime Achievement.  The citation read: “He has truly changed the face of radio and the nature of the radio interview for an entire generation."
He is frequently referred to by newspapers as a “national treasure" - which he loathes because he says it makes him feel a bit like one of Queen Victoria's commodes! He was far more flattered by a former Foreign Secretary who once wrote that the only thing that kept him awake at night was the prospect of being interviewed by John Humphrys in the morning.
But he has also achieved something else. He has become a hate figure in his time for BOTH major political parties. When the Conservatives were in power he was savagely attacked by one cabinet minister for “poisoning the well of democratic debate" with his style of interviewing. When the Labour Party was in opposition he was praised by them for his robust approach. Then, when Labour came to power, all that changed and he was attacked by New Labour for giving ministers a hard time. He was described as the “John Humphrys problem". They called for him to be sacked. So he went from being a hero of the democratic process to a villain in a matter of months.  A funny old business, politics!
Apart from his broadcasting work John writes bookson a range of subjects and newspaper columns and has set up his own charity: the Kitchen Table Charities Trust. He is the former "Today Programme" and Mastemind Presenter, and current presenter on Classic FM.
"Just a quick note (and I apologise that it is electronic rather than in a letter!) to thank you for your excellent contribution to last night's event. Much appreciated."  John hosted the Mining Awards
...John was a hit with our customers. He received plenty of laughs and grabbed the attention of his audience, hence the amount of questions that were thrown his way...  John spoke at a series of customer workshops for Royal Sun Alliance
"...the debate worked really well, John made it into a very stimulating discussion from which we have received some excellent feedback"
Leapfrog Medical - John chaired a debate on epilepsy
Read More