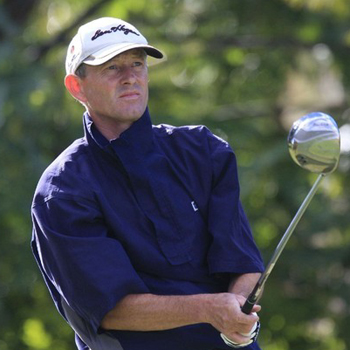 Brixton, Wandsworth and Coldingley.  The very names strike terror, conjuring up images of brutality, violence and drug addicts.  Yet in a moment of weakness, highly respected professional golfer John Hoskison swapped the haven of Surrey golf clubs for the squalor and danger of some of the toughest prisons in the country.  He talks about his golfing career and the extreme highs and lows of his life to help motivate and inspire others.
When John first started as a young professional on the European Tour he took some awful beatings finishing nearly last in every event.  But learning from his mistakes he started to develop a game plan that would lead to eventual success.
Playing with world class players like Faldo, Woosnam and Ballesteros showed him the necessary qualities needed to succeed.   In times of trouble they concentrated on getting the basics right - they were adaptable - their preparation was meticulous and they never gave up.    It was these vital lessons that John incorporated into his own game that eventually enabled him to cope with formidable challenges such as playing in the British Open at Royal Birkdale, where he shot a final round of 71.  In 1985 John won a 'Shooting Star Award' for the most improved player and shortly after led Europe V USA in PGA Cup Matches.
However, injury temporarily cut short John's tournament career and he turned his attention to coaching, imparting to his pupils the vital lessons he had learned about performing under pressure.  He regularly contributed articles for Golf Monthly and became Surrey PGA Captain overseeing the training of 100 young professional golfers.  In his own words he had created the 'most perfect life'.
But this idyllic world was shattered in the blink of an eye when he broke a discipline he had maintained for 20 years and accepted a drink after a golf match.  On his short journey home he hit and killed a cyclist......John received a three year prison sentence.
Thrown into an alien world he faced the daunting task by using lessons he had learned as a professional sportsman.  He survived with great courage, a good deal of luck and a fanatical devotion to his own personal fitness, jogging on the spot for hours in his cell.  He described his experiences in a book called 'Inside' which was endorsed by Sir David Ramsbotham (now Lord Ramsbotham) HM Chief Inspector of Prisons.  Widely reviewed, it was recommended by the Daily Telegraph as compulsory reading for all Home Office Ministers.
Since his sentence ended John has continued to teach golf and rekindled his competitive golf instincts when welcomed onto the PGA European Seniors Tour.  He has in addition developed a speaking programme addressing top Judges, Magistrates, lawyers and others interested in the prison system.  Latterly he has become one of the most sought after school speakers in the country.
Based on his own experience he stresses the need for hard work, careful preparation and the qualities of courage and resilience in the face of adversity as being essential ingredients for a successful life.
His articulate and very personal style enables him to establish a close rapport with his audiences, which is borne out by the numerous testimonials he has received.
"I have had a lot of positive feedback regarding John's talk and students found it very engaging and useful.  I think it is an inspiring way to demonstrate how one can deal with adversity."  Matthew Arnold School's Pre-Sixth Form Enrichment Day - October 2013
"John spoke with passion and enthusiasm and had every member of the audience totally gripped with his fascinating story.  His message was extremely well delivered and pitched at exactly the right level.  A truly inspiring speaker, whose message should be heard by all!"  John talked to students at Northwood College - September 2012
"I would like to thank you personally for an incredible speech that you presented to us the other week.  I am sure cases such as yours are rare but you highlighted the reality of what can happen when a person says 'yes' instead of 'no'.  I have learned many valuable lessons that I will carry very close through the rest of my life.  The benefits of you sharing your experiences so openly with us are vast, and your effect on the school will be felt for a long time."   Head Boy, Tettenhall College - March 2011