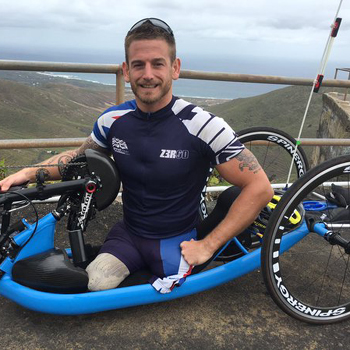 An enduring image from the opening ceremony for the London 2012 Paralympics was the spectacular arrival of the Paralympic flame.  It arrived in the stadium from the darkness of the night sky with disabled Royal Marine Commando Joe Townsend's breathtaking zip wire descent.

Joe had started his Royal Marine Commando training in 2005, joining 40 Commando in Taunton, Somerset in 2006. He was deployed to Afghanistan on Operation Herrick 7 in September 2007.

But at 0800 on 8th February 2008, while on a foot patrol, Joe stepped on an improvised explosive device (IED),  resulting in the loss of both of his legs above the knee as well as various other injuries.

From February 2008 to July 2008 Joe was in Sellyoak hospital in Birmingham undergoing life saving surgery.  He spent six weeks in intensive care during his initial five and a half months stay in hospital.

July 2008 he moved to the Defense Medical Rehabilitation Centre at Headley Court in Surrey.  He was in rehabilitation over the next three years during which time he received new prosthesis and training.  There followed many further  admissions to hospital for yet more surgery, and to date he has had over 50 operations.

In January 2011 he began training for Ironman UK Bolton with Team True Spirit.  Ironman is a massively challenging 2.4-mile swim/ 112-mile cycling/ 26.2-mile run.  A daunting enough challenge for an able-bodied athlete but Joe tackled it head on completing his Ironman UK on 31st July 2011 and becoming the first and only wheelchair athlete to do so.

December 2011 Joe was accepted onto the British Para-triathlon World Class Affiliate Squad.  In April 2012  in his debut event for GB in the European Para-triathlon Championships in Eilat, Israel he won Bronze.

A month later he took the Silver in the British Para-triathlon Championships and in June 2012 he competed in the RAAM (Race Across America).  This is a 3,051 mile cycle race from the west to east coast and Joe completed the race as part of an 8-man team of injured servicemen in 7 days, 7 hours and 38 minutes.

In July 2012 he competed his second Ironman setting a new personal best of 12 hours 40 minutes on a slightly longer course than before. Then in October 2012 Joe competed in the Kona Ironman World Championships in Hawaii, against the world's best athletes and parathletes, finishing 2nd in his category.

Just 8 days after Hawaii, he competed in the Para Triathlon World Championships in Auckland, New Zealand representing Great Britain. He came 6th in the world, beating his competition from earlier in the year.

Joe hopes to represent  Great Britain at the Rio 2016 Paralympic Games in the Games first ever Para-triathlon event.