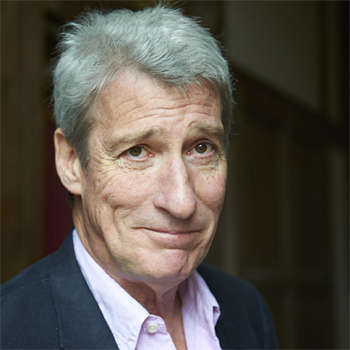 Jeremy Paxman was born in Yorkshire in 1950, educated at Malvern College in Worcestershire and received his degree in English from St Catharine's College, Cambridge.

For three years in the mid-Seventies, Jeremy Paxman was based in Northern Ireland, where he covered the Troubles for the BBC.

In 1977, he joined the Tonight programme as a roving reporter, followed by a five year stint as a reporter on Panorama, where assignments took him frequently to Africa, the Americas and the Middle East.

For several years, he presented Start The Week on BBC Radio 4 and from 1989 to 2014 he anchored BBC Two's flagship Newsnight programme. In his last appearance on Newsnight he memorably interviewed Boris Johnson as they rode a tandem together.  On leaving the programme he commentated "After 25 years, I should rather like to go to bed at much the same time as most people."

Jeremy became chairman of BBC Two's University Challenge in 1994 and has achieved the distinction of being the "longest-serving current quizmaster on British TV.

He has presented many documentary programmes.  His acclaimed four part documentary The Victorians, exploring Victorian art and culture, was transmitted on BBC One in 2009. In 2012 the series Empire saw him examining the history and legacy of the British Empire.

In March 2015 he co-presented David Cameron and Ed Miliband Live: The Battle for Number 10, in which he interviewed the Prime Minister and the Leader of the Opposition on their track record in politics and their plans if elected Prime Minister in the general election.  He also hosted Channel 4's Alternative Election Night with David Mitchell.

Jeremy has written widely for newspapers and magazines. His books include A Higher Form Of Killing (with Robert Harris); Through The Volcanoes: A Central American Journey; Friends In High Places: Who Runs Britain?; Fish, Fishing And The Meaning Of Life; and the best-sellers The English: A Portrait Of A People; The Political Animal: An Anatomy; On Royalty, The Victorians: Britain Through the Paintings of the Age and Empire: What Ruling the World Did to the British.

Jeremy's charitable interests include homelessness, mental health and education. In his spare time, he goes fly-fishing.

He is an honorary fellow of St Catharine's College, Cambridge, and a Fellow by Special Election of St Edmund Hall, Oxford.