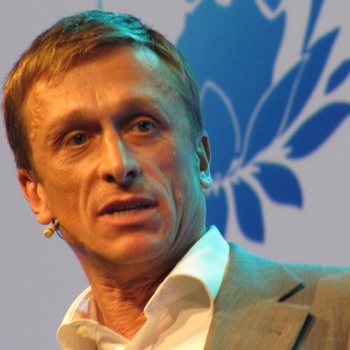 On 27th February 2012, at the University of London Union, Jeremy launched Peace One Day's Global Truce, alongside Peace One Day ambassador Jude Law and Liam Burns, national president of the National Union of Students.
Jeremy recently spoke at Ted in Edinburgh where he received a standing ovation! To view the presentation in full, visit the Ted.com website.
Jeremy grew up and was educated in Southampton to the age of 12 when he landed the role of Bugsy Malone in the West End, and then trained as a dancer from the age of 13 to 16 and then as student of musical theatre until joining the Royal Shakespeare Company at the age of 17.
After a successful career acting in film and television, Jeremy began making his own films in 1995 and in 1999 founded the non-profit film project Peace One Day to document his own efforts to establish the first ever day of global ceasefire and non-violence. As a result of Jeremy's efforts, Peace Day 21 September was unanimously adopted by UN member states in September 2001.
Jeremy's award-winning feature-documentary Peace One Day, produced in association with the BBC and Passion Pictures, premiered at the Edinburgh International Film Festival in 2004 and has received widespread critical and public acclaim, having been licensed for broadcast in 14 territories, playing at 30 international film festivals.
Gilley's organisation Peace One Day now exists to raise global awareness of Peace Day and engage all sectors of society in the peaceful observance of Peace Day 21 September. To date, Gilley's latest film The Day After Peace, also produced in association with the BBC and Passion Pictures, has been licensed for broadcast in 91 countries and has received screenings at Film Festivals and special public screenings in 62 countries. The Day After Peace charts Gilley's journey to Afghanistan with friend and actor Jude Law, who together worked alongside UN field staff and other agencies to help secure the conditions in which immunisers could move safely to areas otherwise unreachable.
Following an agreement by all parties to suspend conflict in the region, 3.2 million children were vaccinated against polio on and around Peace Day in 2007/8.  Jeremy is currently working on a new documentary, focusing on the process of institutionalising Peace Day (defined as the point at which global awareness of Peace Day becomes self-sustaining) and the continuation of life-saving activities around the world on the Day.
In December 2010, at The Hague, Jeremy Gilley was presented with the Carnegie Foundation's 2010 Carnegie-Wateler Peace Prize for his achievements. Other recent awards include: Cinema for Peace 2009 - Most Inspirational Movie of the Year (The Day After Peace); Geneva Cinema Vérité - Cinema Verite Award (The Day After Peace); Zimbabwe International Film Festival - Best Documentary Award (The Day After Peace); Britain's Best Award 2008 (Campaigner of the Year); IVCA Clarion Award Winner 2008 " Champion Award; Jeremy was the recipient of the James Hammerstein Award 2006.
Jeremy is the author of a children's book 'The Making Of World Peace Day', illustrated by Pulitzer Prize winner Karen Blessen, Published by G.P.Putnam's Sons, a division of Penguin Young Readers Group.
"Jeremy was simply inspirational.  His energy flowed off the stage and by the end of his talk half the audience seemed ready to join the Peace Day crusade".  Praise for Jeremy's keynote speech at When World's Collide conference  - May 2012
"Sunday was brilliant!  The day was all business & marketing speakers so having Jeremy at the end was a real surprise to everyone there...I hope Jeremy enjoyed it as much as we did.  It was an absolute pleasure having him there."                         Wellbeing Business Secrets   February 2010
Read More